By now the internet will be weighted down with reviews for the Hobbit movie from a nation of bleary-eyed nerds who stayed up way past their bedtime to watch a film that would transport them back into their favorite mythical world: Middle~Earth.

Regardless of that, I feel compelled to add mine to the fray.

Why? I really don’t know. I know that part of it is that The Hobbit may be my most-anticipated movie of all time. I don’t think there has ever been a movie that I looked forward to with more excitement, but with increasing trepidation as news of more and more changes came to light about the making of the movie.

I was about ten years old and had just turned in a Dungeons and Dragons “Choose Your Own Adventure” book to my school library (I tried to find the exact one, but couldn’t. I can’t remember the title. It had something to do with a basilisk and I can picture the cover, but that’s it).

The library was having a Book Fair that day, and if your school didn’t have Book Fairs, I am truly sorry, it was a great opportunity to get new books for cheap and also some high quality scratch-n-sniff erasers and those weird pencils where you take the old lead out and shove it into the butt end of the pencil and it pushes the new lead out. I know how that sounds.

My librarian was a good friend of my mom’s and I had a few dollars to spend at the Book Fair that day. She handed me this book: 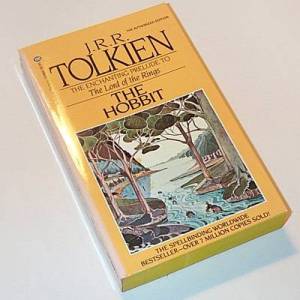 pic stolen from the internet

To say that I devoured this book would be an understatement. I could not stop reading it. Not only that, but I read it over and over and over. I told someone yesterday that I think I’ve read the Hobbit well over a hundred times, and that is no exaggeration.

The Hobbit changed my life, for the better I would say. With the exception of most of my music tastes, everything that I am into can be traced directly back to this first introduction to Middle~Earth.

In fact, I didn’t even know it was a prologue to anything. I didn’t discover the LOTR trilogy (I know some folks take issue with calling it a trilogy, but anyway, you know what I mean) until I was a teenager. I really don’t know how I didn’t know that The Hobbit was a prologue for those few years, but so be it. When I found LOTR at around 14 or so, I had the same reaction, but it will always be The Hobbit that first grabbed me and would not let go, and still has not. The wife and I listened to the audiobook (the Rob Inglis one, of course) on vacation. I send it to every little kid I know for a gift.

And I know I’m not alone. The hype behind this movie is enough to prove that.

Like Quickbeam over at TORn, I want to do a quick “spoiler free” section for the people who have not seen it yet (are you out there?).

Most of the reviews are saying it is too long and too slow. Having read that before seeing the movie, I thought, “These people are stupid and are spoiled by movies like Rush Hour 2 (my go-to bad movie). The first film is the set up and will probably focus a lot on character development and identifying each dwarf as their own separate personality.”

I was wrong. While you do get a decent introduction to each dwarf (over the course of roughly 3 hours), it is unfortunately true that some scenes could easily have been trimmed. Not cut completely, just trimmed a smidge. A minute there, 2 minutes here, and voila! the studio has 3 blockbusters made and waiting in the wings to drain my fellow hapless nerds of their income. I really did feel like some scenes were stretched out in an effort to pad the time. And that sucks because I never felt that way about the LOTR movies, even though the EE’s of each are like 4 hours.

I don’t think the movie is boring, though. Far from it. In fact, it’s a little too action-y.

Is this a Jerry Bruckheimer film? Not to give anything away, but suffice it to say, I never pictured any of the action sequences in The Hobbit happening the way they did in the film. The only word I can think of is “overwrought”.

I realize that a certain amount of the “suspension of disbelief” is required for happy movie watching, especially considering this is a tale of elves, dwarves, magic, and dragons, but the amount of stuff we were supposed to buy into was a bit much.

We saw it in 3D, which I did not care for. It was fun at times, but it didn’t really add anything to the story and, at times, really made it look like we were watching a cartoon (I kinda wish I had just stayed home and watched the Rankin/Bass one).

I am really not good at “no spoiler” reviews. I honestly don’t really know what is appropriate to discuss or not.

SPOILERS AHEAD!!!!!!!!!!!!!!!!!!! (including possible spoilers for the next couple films. If you haven’t seen the movie or read the book, proceed with caution)

Like I mentioned above, if the book purists hated the LOTR films, their heads are going to explode when they see The Hobbit.

But let’s be positive for a moment:

– The cast is actually pretty darn good. Martin Freeman is a wonderful Bilbo, and of course the returning cast is good (though I thought the opening scene with Old Bilbo and Frodo seemed incredibly stilted and poorly acted). Despite my qualms with “hot dwarves”, they all seemed to be cast pretty well. You can blame the Design Dept. for making the dwarves that could pass for short elves.

– The best two scenes are the heavy Bilbo scenes. I wanted more of Bilbo just living his life in the Shire than we got, but if the critics thought it was slow already, more of Bilbo puttering around his house and smoking his pipe and having tea would have put them in a coma. I also thought the scene with him and Gollum was probably the best scene in the entire movie. At least no one was falling thousands of feet, only to end up in slight discomfort.

– I also liked the end. The thrush (foreshadowing) waking up Smaug with just the eye showing through the treasure was great.

That’s about it for the positive stuff. Here are my gripes:

1. Orcs and goblins can’t travel effectively in daylight. I’m no loremaster, but I thought that the point of Saruman creating the Uruk-Hai was that they could run in the daytime. This makes the whole “goblins hunting the merry band of dwarves” a bunch of bullmess, which is unfortunate because it’s a huge part of the movie.

2. Radagast??? I have always been curious about Radagast, and found this mysterious character intriguing, but he shouldn’t interact with the dwarves. Gandalf only. This is where my knowledge of what happens in the appendices gets a bit fuzzy. I know that Gandalf met with Radagast concerning the Necromancer setting up camp near Mirkwood, but I’m not sure what exactly went down. The stuff about the Morgul blade seems a bit of a stretch, especially when Galadriel shows up (who should not be involved in The Hobbit at all).

3. Thorin should not be nice to Bilbo this early in the game. Part of the reason it’s a huge deal in the book is because Thorin is kind of an ass to Bilbo throughout the book, up until the end when he realizes that Bilbo is flippin awesome. His whole bro-down with Bilbo at the end of this one is meaningless and made me groan aloud.

4. A hot dwarf being a badass archer. Lame.

5. That scene with the Storm Giants. What the eff was that all about? Once again, overwrought action sequence stretched out to squeeze a couple extra minutes (i.e. dollars) out of the “series”.

I give it a 6/10. Better than average, because it takes place in Middle~Earth, but some points get taken away because it felt like every other action, comic book, movie garbage that is out there, and The Hobbit is way more than that. It’s better than that. At least it should be.

To be honest, I’ll probably go see it again in the theater and I’ll definitely buy the EE when it comes out on blu ray, but that’s only because I can’t help myself (which is why, as I’ve stated before, the studios are making all these “geeky” movies. They know we can’t help ourselves).

I would really like to discuss with other fans, though. Feel free to sound off below, whether you agree or disagree. My feelings on the film are so conflicted that I’m open to every point of view.

This entry was posted in About Me, About Media and tagged film, lord of the rings, movie, review, the hobbit, tolkien. Bookmark the permalink.

5 Responses to the Hobbit Review