A Lovely Late Summer Day with Vlad… the Destroyer

Posted on September 29, 2011 by bayoubabylon

Friends, today is Thursday. No trip to the JFZ today because, as referenced here, I wake up at noon on Thursdays and I will not go to the JFZ after noon. But does that mean that we must take the day off and lay around eating buffalo wings and watching old episodes of Aqua Teen??? NO!!! Rambogoncon would never approve of such a lack of discipline! Our only off days are the weekends, and those still take willpower and the eye of the tiger to survive!

No, friends, Thursdays are not off days. In fact…

Thursdays are Daddy-Day. But not with any kids. Because I don’t have any (that I know of, hyuck hyuck hyuck).

No, Thursdays I sleep till about noon, then spend the rest of the day hanging out with my man, Vlad the Destroyer. You remember Vlad, right? He’s that crazy kettlebell I told you all about just, like, a few days ago! The Balrog of fitness products? The Merciless Master of Mangled Muscles? The Spine and Shoulder Dislocator Extraordinaire?

Sure, you remember him.

Today I woke up at my usual time on Thursdays, ready to stumble into the kitchenette for my usual breakfast of yogurt with some granola mixed in, V8 (chugged as fast as possible straight from the bottle), and coffee (to wake the bowels). I was preparing this breakfast when I noticed a twang of movement outside by the oasis.

I went outside to investigate and found this… 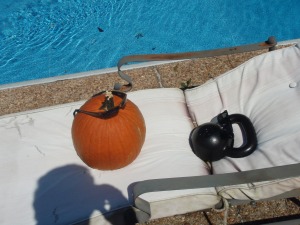 Vlad had invited Punkin Puss, that olde thyme enemie of myne, over and they were hanging out by the pool!!! Vlad knows that I do not approve of him hanging out with such riffraff as Punkin Puss, so I know he was doing it just to spite me. And they had borrowed my sunglasses to boot! And without asking!

If you’ll read the caption above, that is what I told Vlad. I says to Vlad, I says, “Vlad! I didn’t say you could have company! And especially not this neanderthal!”

Punkin Puss looked at me and said, “Ah, blow it out your ass, dude!” And they started laughing and Vlad, through his laughter, said, “Yeah, your FAT ass!!!!”

Vlad, I know we’re pals and all, and that you were just under a bad influence, so I’ll let this one go without throwing you off a bridge.

Then they had a few beers…. MY beers. 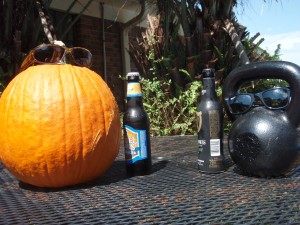 Which inevitably leads to this….

Although I like Punkin Puss’s choice of shot glass more, ya gotta respect how much bigger Vlad’s is. I told you kettlebells were tough. I think Punkin Puss was just putting up a tuff front for Vlad. I don’t think he normally drinks a lot. Have you ever had pickled pumpkin? Me neither, but I bet it sucks.

I went inside because I don’t like to be around pumpkins after they’ve been doing shots. They tend to get really self-destructive. I took a psychology class once, so I think this is because they have such a short lifespan anyway, that they figure nothing matters. Nihilists, the lot of ’em.

Eventually, I had to come back outside to make sure Vlad hadn’t gone all Billy Corgan on Punkin Puss (meaning, engaging in illicit kettlebell/punkin oral pleasures). I can’t have that on my conscience, and I didn’t want the neighbors to call the cops (though why they thought I was having a photoshoot with a cannonball and a pumpkin with sunglasses on is anyone’s guess).

I came out of a side door, so I could sneak around and spy on them, in hopes of checking on their well-being but yet still not get noticed. Vlad has a funny way of calling me out about stuff like that.

Punkin Puss had stolen my duck mask and was making fun of me!!!! And there was Vlad, yucking it up!

I snuck back inside and drank a cup of tea. Something had to be done. I’ve threatened Punkin Puss in the past, but I was really hoping to be able to cut his guts out when he least suspected it. Now I thought I may hafta use a more forward approach. Like walking up to him, picking him up, and powerbombing him into the driveway.

As I was drinking my tea and catching up on my stories, the two came in, arguing…

There’s only one place this was going…

I know Vlad had to have started it, and if I didn’t step in quick, Vlad’s hardass was going to splatter Puss’s innards all over the carpet. And then I’d hafta go buy another pumpkin. Those things are $5, plus I’d hafta leave the house! Eff that, I was gonna do somethin’…

So I sent Punkin Puss home. Told him he had to go and that I couldn’t have violence in my home, especially racially-motivated violence between two inanimate objects.

Vlad immediately did another shot and ran outside…

Vlad got on the diving board and was going to jump in, committing suicide (kettlebells can’t swim. they just don’t take to the water as well as us.). Well, not immediately, but rust is a motherfucker. And I didn’t feel like jumping in and repeating my Boy Scout training of lifting a piece of cast iron off the bottom of a pool.

I coaxed him down off the edge of fitness oblivion, but he was not done with his drunken notions of, somehow, getting into the pool…

You have no arms, Vlad!!! Are you mad? How do you plan to row that thing??? Also, kayaks tip over easily and, once again, I’m not jumping into frigid poolwater just to save your dumbass. And since I would hafta be the one to physically put you in the pool (just like I put you in this kayak), nuh-uh, not happening.

Well, since Vlad was now the only one wasted around the house, and I was being a spoil-sport, he called it a day. He moped inside and sat down to watch the View…

But he had had too many shots, which inevitably led to this… 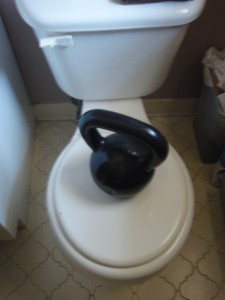 Yes, I took a picture of a kettlebell on the toilet. Shameful, I know, but whatta ya gonna do? I needed the scoop, and the scoop was that Vlad had had entirely too much to drink.

I held him up, to keep him from falling into the toilet while puking up little iron bits mixed with hard liquor (which it’s too bad I couldn’t save).

“One night Nikolai came home from the bar after a long night of drinking cheap vodka and found an urn on his doorstep.

Nikolai rubbed the urn and a djinn came out and said, “I will grant you a wish!”

Nikolai wished that, when he pissed, that he would piss the finest vodka in the world. I dunno, Grey Goose or Aristocrat or some shit…

The genie said, “Done!!!” and disappeared, taking the urn with him.

And so it was. Every day, Nikolai would bring home two glasses and urinate into them and he and his wife would enjoy the finest vodka that they had ever tasted.

“Where are the glasses?” asked his wife, Anastasia. For she was eager to enjoy the fine vodka.

Nikolai thought for a minute and answered, “Tonight, my dear, you may drink straight from the bottle…””

I asked Vlad the moral of this parable and he just laughed and told me to go to hell.

I love you, Vlad the Merciless Destructor of Shoulders and Self-Esteems. This one’s for you…

This entry was posted in About Fitness, About Me, General dorky shit. Bookmark the permalink.