Fitness Words… What the deuce do they really mean?

Posted on September 30, 2011 by bayoubabylon

Yesterday a friend of mine asked me if I was still keeping up with the “fit” side of fitfordragoncon.com. It made me realize that I haven’t had a post about fitnessing in a little while, and also made me remember why I started this blog in the first place: so that I would have someone to be accountable to for my own journey towards being fit (that would be you, the audience, if you are out there). I also started it hoping that more people would come on here and discuss their own fitness goals, without the shame of being humiliated for who we are as “geeks” (although, to be honest, I don’t like being called a nerd or geek. I prefer just being acknowledged for sometimes having eccentric interests). That hasn’t happened yet, but I’m not going to give up hope that fitfordragoncon.com will, someday, be a place for just that. Even if it’s after Dragon*Con 2012 and we’re looking forward to 2013.

I am not a fitness expert, if you can believe it. I’m just a guy who sometimes gets lumped in with a group of people who are notorious for being overweight and lazy, and I want to break that stereotype. Not just for us “persons with eccentric interests”, but for everyone to know that, just because we like comic books and video games, doesn’t mean that we also can’t be fit and trim and in shape.

Being as it is, that I’m not a fitness expert, I’ll admit that I have no clue about what I’m doing. In other words, when it comes to fitness, coming up with original fitness-related content for this website is going to be nigh on impossible, and I don’t want to just be a parrot for the “real” fitness sites, linking to them and just repeating what I read somewhere else.

But I figured, since I am a fitness novice, my audience probably is too. So why don’t I use that to my advantage and be honest about the fact that I am learning, so that maybe we can all learn together. It’ll be like some giant, eccentric-interest-based, fitness brainstorm! Or rather, it’ll be more like me trying to figure out how to elevate my fitness to the next level (that would be level 1-2, the underground one, right now) and, hopefully, attract a like-minded readership.

Now that my Mission Statement is out of the way, we can get to the meat of this post…

I refuse to buy into fitness buzzwords. Or fitness buzz-phrases, and myths or fads. My dad always says, “They’ve been trying to prove coffee’s bad for you for 50 years and they haven’t done it yet!”

This is true for a lot of things. One day they’ll say, “Eggs are bad.” Then the next day they say, “Eggs are the perfect food.” (“They” means the jackass health professionals they have on the teevee)

In the end, it usually balances out. What this means to me is that we can eat whatever we want… within reason and in moderation, and as long as we keep exercising.

I’ve been eating “good for me” stuff for a little over two weeks now, and I don’t plan on stopping any time soon, but I like to think that, as I get more and more fit, that I’ll be able to incorporate small amounts of my old favorite foods (pizza, buffalo wings, pasta, cheese, etc.). I’ve never been into junk food too much, so I don’t even worry about the next time I’ll be able to have a piece of cake or a candy bar. Most guys I know are like that; we’re not fat because of tater chips and chocolate, we’re fat from meat and potatoes: too much of it, and not enuff exercisings.

Getting back to the “eggs” thing, who can we trust? Well, if the eggs and coffee are any indicators, we can only trust ourselves to try and do the best we can.

There are some words, though, that I’ve been hearing for years and years and years, and I know they mean something healthy, but I just don’t know what, exactly, they’re talking about.

Today we’ll get to the bottom of some of these words. What they mean, and how they work. This will kinda be like the urban dictionary, I guess. Or more like, “Fitness Jeopardy for Fitness-Ignorant Geeks”.  I’ll give the word, then I’ll tell you what I think it means, then we’ll try and find out what it really means, and compare notes.

First off, here’s what got me thinking about this topic to begin with…. 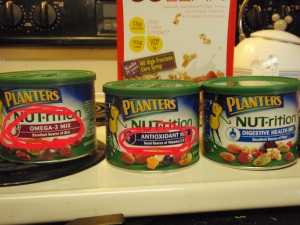 That’s correct. These are the healthy fruit and nut sets that I got the other day at the store. Only in this picture, I have circled the words that I don’t know, but that sound healthy as fuck. “Omega-3” mix, “Antioxidant” mix, and “Digestive Health” mix. “Digestive Health” isn’t circled because I’m pretty sure about what that means. It means that this particular mix is gonna make you shit like a goose. I once compared this trio to the Ghostbusters, so I’m gonna say that “Digestive Health” mix is Ray, Omega-3 is Egon (clearly the nerdiest of the bunch), and “Antioxidant” is everyone’s favorite: Bill “Ghostbustin’ ass” Muwway.

I think I’ll started with “Antioxidant”….

No clue. I have zero clue as to what an antioxidant is, or what it does. I know that hot tea is a good source of antioxidants because I drink a lot of it and people tell me that, but I just assume it is a good thing to have in your beverage. Hmmmm…. ANTI- meaning against. OXIDANT- meaning something with oxygen, I’m guessing. This doesn’t sound good. I don’t know if I want antioxidants. This probably is some word that has to do with some vaguely-hippy idea of cleansing your body of toxins. Maybe antioxidants make you sweat like a whore in church, thereby relieving you of the toxins that are somehow in your sweat glands? Ok, that’s my final answer. They cleanse you of “toxins” (whatever that is).

Now it is time to consult the Oraculum Internettum Infernus… brb. irl.

Ok, so wikipedia was the first entry that came up on the googly. I know wikipedia is about as credible as an 8 year old who just got caught with a Playboy, but it seemed to know what it was talking about. In fact, it was a little too good (i.e. technical and shit) for me to just thumb through and get a definition. The impression that I got was that no one really knows if antioxidants are good for you or not. They do prevent oxidation of something, and this something apparently may cause everything from cancer to motion sickness, though in tests, nothing has really ever been conclusive.

Is this myth busted? Well, can’t say for sure, and that’s sorta the problem. People like me hear the word “antioxidant” and think “Oh snap, that is some healthy shit right there!” But really, it may or may not be.

This is fish, right? I know everyone says fish is good for you “cuz it’s got dem Omega-Threes n shit.” But does anyone really know what an Omega-3 is? I know it’s a fatty acid, but what the devil is a “fatty” “acid”? Any kind of acid I’ve ever dealt with certainly was not fatty (pieces of paper are pretty slim, after all, gnome sayin’???). And the acid in the movies can almost eat all the way through a spacecraft! I don’t want that in my body! I’m going to guess here and say that Omega-3 is a “fatty acid” that somehow lowers your cholesterol, like by burning out blockages with acid. Final answer and whatnot.

What say you, internet? stand by…

Much like “antioxidant” the hows and whys of Omega-3’s are too complicated to get into here, but it does seem that Omega-3 is definitely good for you, unlike antioxidants which just “might” be good for you. Omega-3 is, indeed, a “fatty acid”. What the hell is a fatty acid? Here’s some witch doctor mumbo jumbo on the subject:

In chemistry, especially biochemistry, a fatty acid is a carboxylic acid with a long unbranched aliphatic tail (chain), which is either saturated or unsaturated. Most naturally occurring fatty acids have a chain of an even number of carbon atoms, from 4 to 28.[1] Fatty acids are usually derived from triglycerides or phospholipids. When they are not attached to other molecules, they are known as “free” fatty acids. Fatty acids are important sources of fuel because, metabolized, they yield large quantities of ATP. Many cell types can use either glucose or fatty acids for this purpose. In particular, heart and skeletal muscle prefer fatty acids. The brain cannot use fatty acids as a source of fuel; it relies on glucose or ketone bodies.[2]

What I’m gathering from this jumble of shit is that it’s the ATP’s that make fatty acids, including Omega-3, healthy. Now…. what the devil is an ATP???

STAY TUNED TOMORROW FOR THE EXCITING CONCLUSION OF “FITNESS JEOPARDY FOR PERSONS WITH ECCENTRIC INTERESTS”!!! INCLUDING, “WHAT THE HELL IS AN ATP???”!!!

This entry was posted in About Fitness, About Me. Bookmark the permalink.

1 Response to Fitness Words… What the deuce do they really mean?