Top 5 Reasons Why Dr. Seuss’ “How the Grinch Stole Christmas” Should be Your Favorite Christmas Special

Posted on December 6, 2011 by bayoubabylon

I am a total sucker for Christmas-y stuff, just like I’m a total sucker for horror and Halloween stuff. If something is themed like Christmas, it immediately gets a 5/10 rating from me, and can only build from there. I know that 5/10 is only “average”, but that also means that anything Christmas-y is at least as good as your average movie (for the record, I think most movies are well below average).

So, with that said, put the Jim Carrey y2k version out of your head. Just for a second, forget that it was ever made. Forget that it tarnished the legacy of the Grinch and Dr. Seuss movies for all eternity. I’m not saying it was bad (6/10, for the record. Better than average, but not much), but the 20 minute 1966 television special is so much better that, when I tell you these five reasons, you may soon be filled with a strange desire to go burn down Jim Carrey’s house and decapitate Opie.

See, these are the TOP FIVE reasons why geeks like us should immediately move How the Grinch Stole Christmas straight to the top of the “Must-Watch Holiday Specials” list that resides in our brains.

Without further ado, here they are, the top 5 reasons yada yada yada…

#5. the Grinch is a bad motherfucker

Admit it, geek. There is a big part of you that has a strong disdain for authority. Whether it is because you were mercilessly picked on when you were in school, or, if you are a lot younger than me, it was the cool thing to do, there is something inside you that hates the status quo. It’s that part of you that loved V for Vendetta years before the movie came out. The part of you that causes you to not let some asshole with a Bama sticker on his car get in front of you in traffic. The part, dear reader, who wants to see the whole fuckin thing collapse and burn. 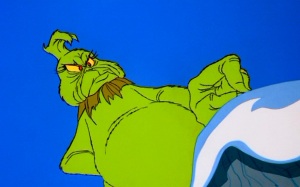 Well, if you are like me, and the normal state of affairs in this miserable world makes you want to barf, then you have found your king: the Grinch. The Grinch hates the Whos. He hates. them. There is no more grumpy, sour, jaded, cynical, misanthrope than the Grinch.

Hate Christmas with all its bullshit, seemingly-fake cheer? So does the Grinch. But he hates it more than you do.

Can’t stand noisy kids in the restaurant, or anywhere else? So does the Grinch. But he hates them more than you do. The Grinch would probably eat them.

See friend, what separates the Grinch from the rest of us is that:

a. He’s scary. Let’s face it, the Grinch is a monster. In the Jim Carrey version we’re led to believe that he’s a Who that has gone bad. Well we say “fuck that”. The Grinch is something else altogether. A mountain troll, and a grumpy one at that. Or a green yeti. Think the Bumble is bad? Nope. The Grinch hates Christmas more than the Bumble, plus he is smart and tricksy and false. Which leads us to:

b. He’s a man of action. It’s one thing to hate on Christmas and your aggressively-normal neighbors and relatives, it’s another thing altogether to go out of your way and actually do something about it. What separates us from the Grinch is the same thing that separates that quiet kid in high school from the DC Sniper: the DC Sniper actually did it. The Grinch is scary because he’s willing to act on his viciously anti-social behavior.

Let’s face it, we hate the Whos too, but we’d never in a million years do anything to hurt them. But the Grinch would, and did.

No foolin’, that is his real name. And he sings the theme song.

Why should we care? Besides the fact that Thurl was the original voice of Tony the Tiger?

Well, here’s a short list of some of the stuff he was involved with:

– the Hobbit (yeah, the Rankin and Bass one)

– Toot, Whistle, Plunk, and Boom (one of the best Disney animated shorts of all times)

But the real reason we should care is because of his involvement in “the Haunted Mansion” dark ride at Disneyland and WDW. Do you know the song “Grim Grinning Ghosts”? Thurl sang it. He’s not the voice of the Ghost Host (that honor belongs to Paul Frees), but he is the lead vocalist for the Mellomen, the 5-piece vocal group who portrayed the singing busts in the graveyard scene of the Haunted Mansion. He contributed to many classic Disney films (Alice in Wonderland, the Aristocats, etc.) and also to the soundtrack of the Pirates of the Caribbean dark ride. And he was the narrator on the 1969 “Story & Song from the Haunted Mansion” record that we looked at during Halloween.

Let’s be honest. Dr. Seuss was the Pink Floyd for the under-8-years-old set. You can’t look at a Dr. Seuss book and not think that it is, possibly, the most psychedelic thing you have ever seen in your life. I’m not saying Dr. Seuss was on the goofballs, but I am saying that it wouldn’t surprise me at all. And that’s fine, because Jim Henson was no stranger to the whacky tobacky himself. In fact, if you ask me, it makes it better.

That great tune that is sung by Thurl “Haunted Mansion” Ravencroft was written by Dr. Seuss himself!

Movies based on books are almost always a disappointment, but we can at least rest assured that the author’s vision hasn’t been compromised if he/she takes a more hand-on approach to a film based on their work. I always wonder what Dr. Seuss would have thought of the Jim Carrey version. I imagine he would have thought it was unnecessary, since his book could easily be wrapped up in under 30 minutes, and already had been.

This short was produced by Chuck Jones and Dr. Seuss together, and directed by Chuck “Looney Tunes” Jones himself!

If you know anything at all about animation, you know that the name of Chuck Jones is right up there with Tex Avery, Mel Blanc, and Walt Disney.

Chuck, consummate animation director that he was, was responsible for some of my all-time favorite animated shorts, and some of the most classic and well-loved Looney Tunes and Merrie Melodies episodes of all frackin times.

If you grew up watching Looney Tunes, and you should have, then you are no stranger to these three works of art.

Thank you, Chuck Jones, for showing us all that cartoons can be funny to kids and adults alike, and for directing some of the absolute best animation in history. 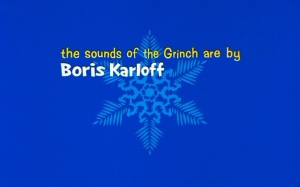 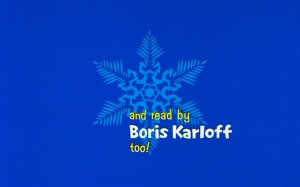 I know the animation nuts out there are wondering why I didn’t put Chuck Jones in the number 1 spot, but the reason is simple: I like horror more than I like animation, which is saying a lot. And Boris Karloff’s name is more synonymous with horror than anyone I can think of. Just the name Karloff conjures images in my head of gothic manors, foggy moors, and a hulking, nameless, horror just waiting in the shadows to pounce on your hapless ass while you go out to get the paper at 5am.

The fact that They got Karloff to do this cements the fact that, like #5 said, the Grinch is kinda scary. Karloff lends an undeniable sense of dread to anything his name is attached to, and it sets the mood for this tale of monsters sneaking into your home on Christmas Eve to do you harm.

That one Christmas Carol says “there’ll be scary ghost stories” at Christmastimes, and I really like that side of Christmas. The side that, while it is exciting that Santa will be visiting your home, it is also kinda scary that a stranger can just come busting up in your house uninvited. As a character says in one of my favorite Christmas movies, “Christmas Eve is the scariest damn night of the year“. Between the uses of Karloff and Thurl “Haunted Mansion” Ravenscroft, the Grinch certainly supports that theory.

So that’s it. Are you convinced to go out and get your grubby mitts on a copy of “How the Grinch Stole Christmas” yet? I’ve made my argument, now it is in your hands. Vote with your dollar: we want more Christmas specials with slightly scary edges to them!

7 Responses to Top 5 Reasons Why Dr. Seuss’ “How the Grinch Stole Christmas” Should be Your Favorite Christmas Special