Triscuits, Crackers of the Gods

Yesterday I said I would review some Triscuits, so I am doing just that. I have no idea when the last time I posted here two days in a row was, but it has been more than a minute.

I like crackers more than I like cookies. It may not need repeating, but my sweet tooth has never been a problem for me. Most guys I know are this way. Our guts came from beer and hot wings, whereas the ladies seem to struggle with the sugar rush.

But before I get to that, I want to tell you what I did in the gym today:
1. 30 mins on the Whirly-Bird. I normally do 45, but I wanted to hit the weights today. After 45, 30 minutes went by in a second, which was nice. A good workout mix on my ipod helps. Today’s anthem: THIS.

2. I then moved on to the rowing machine. I love this fucking thing. Out of the Trilogy of Terror (the 3 weight machines I do on a regular basis), this is the one I like the most. It’s the friendliest in vibes, and I always imagine myself rowing a giant Viking ship. It helps to know that this machine is probably the one that will hopefully help me the most in my goal of cosplaying as a badass. I won’t tell you how much weight I put on this baby, partly because I am embarrassed at how weak I have become, and also because ummm… I can’t think of another excuse. So totally because it’s embarrassing.

3. It was then time for the Pull-Up Simulator, which I used to refer to as “Getting Something Heavy Down From The Top of the Closet” Simulator. The other day I came to the startling realization that this is way more like doing a pull-up than like getting a bowling ball out of the closet. The difference is that I can’t pull up my own weight yet. This seems like a really good way to work up to pull ups. There’s a pull up bar in the JFZ, but there is no way I’m getting on that thing until I can do, at least, 10 unassisted pull-ups. Which should be right around the time the sun explodes. Because despite the JFZ being notoriously free of J’ing, it happens. People can’t help it. But I really don’t mind it. I’ve been a weird-looking chap my whole life, so I’m kinda used to getting the stink-eye.

4. Then came the push-up simulator. It’s funny that 2 of the 3 machines that I usually do just simulate activities that I could do at home. Like driving to the park to go for a walk, when you have a sidewalk that goes all the way around your neighborhood.

5. Sit in the truck, air cranked to 11, drinking water, with my hand on the door handle in case of vomit. It’s really the weights that do it to me. I can stay on that damn Whirly Bird all day, but when I start in on those weights, my breakfast starts prepping for a reunion tour. This, as I’ve said before, is one of my two greatest fears when I enter the gym: yacking or passing out.

6. Stop at the Shell station on the way home and purchase a 12-pack of Michelob Ultra. There’s not much that will net you a weirder look than the one I got from the cashier when I chucked that 12-pack up on the counter at 6am this morning, drenched in sweat and wearing gym clothes. It’s my day off, gimme a break! I assume she knew what I’d been up to, because it was either that or I was still out from a hot night at da club.

On to the Triscuit Reviews!!!

Right. So Triscuits are good. The crackers of the gods and whatnot.
Have you ever had a triscuit? They make other crackers seem like little more than brittle pieces of paper. Ritz has its place in my heart, but the triscuit is its own beast. And since saying stuff is in “beastmode” is popular, I’ll say that triscuits are normal crackers with their beastmode pegged out.
They’re basically just shredded wheat with a little salt.

I’m assuming they got the name from biscuit. I have no idea where the T or R come from. I’m guessing maybe they are made from three kinds of wheat? Who the fuck knows.
It should be whiscuit. Or like these new rice varieties, maybe Riscuit. Although that is pretty dangerously close to Ricin. James Bond poison is probably not the sort of vibe Nabisco is going for. 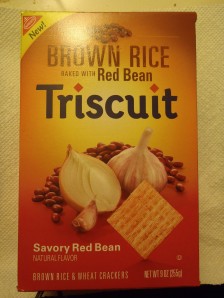 Red Beanz and Riiiice. Imagine Tom Waits singing that. Like a Zatarain’s commercial.

I’ve been eating Red Beans N Rice my whole life. I cook it at home all the time (although these days I must scale back on my use of delicious sausages).

According to the box, these crackers are made from rice and beans. No wheat whatsoever. This makes me think that the name Triscuit could be considered a misnomer here.

They don’t taste like red beans and rice. And they come in a box that looks like it was made for a GI Joe to hold. Not one of those big ones either, the ones we played with. This box is tiny! And it’s like 4 bucks!

Despite being a rip-off, these are pretty good. I can taste the bean, and maybe even a little rice, but red beans and rice is a dish unto itself, and can’t be duplicated in cracker form.

I bought these to be scoops for veggie chili I made, and they fill the bill, but I just think I would rather have that latticed-out shredded wheat slab. The regular ones are cheaper too.

Everybody loves the lowly yam these days. Everywhere I go has sweet potato fries or some sweet potato something or other.
I am fine with this, as I am a huge fan of the sweet potato, particularly in pies, which are off the menu completely for awhile.

Apparently the sweet potato is one of the current health fads. Enjoy it while you can, delicious yams, because next week Good Morning America will have some asshole on that says sweet potatoes cause the cancer. Health fame is fleeting, so yam it up while you can, before your friends look at you like you’re eating a Big Mac next time you order a baked sweet tater.

This is a funny combo. Sweet potatoes mixed with onions. Both of which I like, but together? I am accustomed to my sweet potatoes being mixed with melted marshmallow or a pecan-and-sugar crunchy crust, so I was curious where they were going with this new “savory” angle. These were not designed with the average “overweight male from the Deepest South” in mind. Although something made with me in mind, featuring sweet potatoes, would more likely be named “Oreo” instead of “Triscuit”. Can you imagine that? Sweet potato cookies with a marshmallow cream inside? Good Lord n Butter, Mort.

Anyway, they’re ok. Still in the hobbit-sized box, so they’re still a rip-off, plus they don’t taste as good as the red beans and rice ones. The sweet potato seems to reject this marriage with the bulbous onion, so instead of Tango & Cash (the red beans and rice), you get Lion-O and Mumm-Ra, constantly at odds in your mouth.

5/10 Average. Because any version of Triscuit is, at least, average, and better than most.

There are some things that it really doesn’t matter if you get the store brand. Dandruff shampoo, peanut butter (sometimes), catsup, etc.
I was curious, given the overpriced nature of the aforementioned Triscuit varieties, if Triscuits were something that could have its funk faked.

I figured, it can’t be that hard, right? I’m sure Winn-Dixie has had their own brand of Shredded Wheat for years now. All they needed to do was break some off, salt it, then intricately weave it upon itself. No problem.

And they did. And it tastes just like Triscuit. The only difference is that where Triscuits are square, these are a rectangle.

I also expected half of them to be pulverized into tiny wheaty bits. I don’t know what store brands are up to at their warehouses, but it seems like most things that are store brand look like someone has played soccer with the box, or at least with the crackers themselves. This is especially true with generic brand Ritz crackers. Somehow the “Butter Round” crackers are always more like “butter chemical flavored powder”, yet the box looks to be in pristine condition, fresh off the truck from the “Generic Ritz Cracker Punting Championships”.

Here’s a photo of a “rice Triscuit” next to a Winn-Dixie brand “Grainy Rectangle”:

Texturized for your pleasure. Sorry.

Note that the rice triscuit, on the left, looks different from its wheat cousins. It looks like it is soaked in oil, which it may be, but they don’t taste or feel oily.

It should also be noted that the Winn~Dixie brand only comes in one flavor: delicious plain.

10/10 and a credit to store brand items all over the globe. Save yourself a few cents for the vending machines out front (“A gold watch! Holy shit!”) and get these guilt-free, unless you want your friends to be impressed with your name-brand crackers. Then pay a little extra and keep them out on your counter when company comes over.

tl;dr
Triscuits are good, no matter the variety, but if you’re after the plain kind, you can just get the store brand. But I like the “cracked pepper” ones best.

2 Responses to Triscuits, Crackers of the Gods