People “geek out” about all kinds of stupid stuff. Most of the things that people go crazy about could usually be defined as “hobbies”. Specifically, collecting.

One of my most recent fads (like a lot of guys, I tend to get into something really hard for a short while and then move on to something else) is this: As you may, or may not, know, I am a pipe smoker. A gentlemanly pursuit of the highest order, to be sure. But, for me, it is just a hobby. For most other pipesmokers I have met, pipe smoking is just a hobby, and the hobby of “wet” shaving seems to kinda go along with it a lot of times. How does this make fitforDragon*Con material? Well, it is definitely a nerdy thing to do, plus skin health falls into fitness somewhere, I’m sure.

Before we go any further in this topic, I want to be clear that I am very much a tenderfoot when it comes to wet shaving. I don’t even know why it’s called “wet” shaving, as I’ve been using water while shaving since I started shaving at the ripe old age of 5 1/2.

From left to right, my shaving kit consists of : Colonel Ichabod Conk Bay Rum Aftershave, Tweezerman Pure Badger Shave Brush, Edwin Jagger De89lbl Double Edge Safety Razor (on top of the stand), and a mug that some friends got me for Christmas a few years ago. Inside the mug is this: 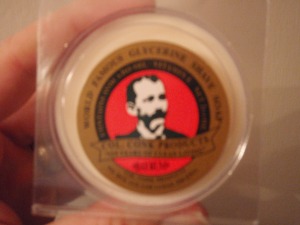 My camera sucks. But that is Colonel Conk’s Bay Rum Shave Soap, I promise.

Bay Rum is my new favorite scent. It smells like the barbershops that I went into as a kid. Very manly. What is weird is that the bay rum scented stuff that I have all smells different, but they are all good. There’s definitely some kind of citrus-y odor in there. Some kind of herbs too.

From left to right (again), here are my quick reviews of these products:

1. Colonel Conk Bay Rum Aftershave. This stuff is expensive. I was misled by amazon to think I would be getting 4 bottles of this stuff, but it turns out that it was a misprint and I paid way too much for the one bottle. That said, this is probably my favorite thing in my shave set. It smells great, makes my face feel like a million bucks (close to what this stuff will cost you), and comes in that neat antique-lookin’ bottle. I use a cotton ball to put it on, as it is just “open” at the top and you don’t want to just dump this crap out willy-nilly because it ‘spensive.

2. Tweezerman Pure Badger Shave Brush. This is probably the most inexpensive badger shave brush you will find. It has a handsome wood handle and, ummmm… it’s a brush. It serves its purpose. It is sitting on my maple wood shave brush stand, which was around $10 or so. I don’t know much about wet shaving yet, but this brush will get the lather from the mug to your face, which unless I am mistaken, is what it is meant to do.

3. Edwin Jagger razor. This thing takes the double-edge blades that you saw your dad use when you were a kid. Unlike some DE Safety razors, it comes apart, rather than opens up, meaning you hafta take the head of it apart to replace the blade. Inside the head of this one, I have a Derby brand blade, which is fine. I like the razor so far. It’s really good-looking, all shiny chrome with “Edwin Jagger” engraved around the neck of it. I did some research and it seemed that this razor was the best value for the dollar (it was around $30, my most expensive item, but hopefully the one that will also last the longest).

4. Mug. Not much to say here. It’s a great shape for its purpose. They sell “shaving mugs”, but I can’t see how it would make any difference whether your mug said “shave” on it or not. Mine says “Camp Sequoyah Camp Leader 1969”. It holds a lather like a mug.

5. Colonel Conk Bay Rum Shave Soap. This is the only shave soap that I’ve used, so I have nothing to compare it to. But it smells great and makes a nice lather. Why Colonel Conk? Well, back when I had a full beard I had good luck with some of their (his?) other male grooming products, plus they sell everything in “bay rum” scent.

As for my shave set, the only thing I would have done differently is to get a cheaper bay rum aftershave. Other than that, I’m quite pleased with all my items and would recommend any of them to anyone interested in getting started in the world of “wet shaving”.

Why would someone get into this? I have no idea. For me, it’s the sense of nostalgia, but people will say anything to justify it. Like these things….

1. “It’s cheaper than what I was spending”. I seriously doubt this. I bought all this crap at one time and it was right at $100 for all of it. A can of Barbasol is like a dollar. You can get disposable razors for even cheaper than that. I was using Barbasol shave cream and a Gillette Sensor razor (old school, even for the “new” razors). True, the Sensor razor “cartridges” are higher than giraffe pussy, and razor blades for my new razor are dirt cheap, but I don’t shave every day, so one box of cartridges could last me a whole year. And most people who get into “wet shaving” aren’t going to buy the cheapest stuff they can get (you can get a puck of Williams Shave Soap at the drug store for less than $2. The soap I have is around $4 each). So yes, it could potentially be cheaper in the long run, but the truth is that it isn’t for most wet shaving enthusiasts. And that’s not even factoring in the real “hobby” factor: the collecting of the gear. Many wet shavers collect razors and brushes, which can be ridiculously expensive. In closing on the financial aspect of wet shaving: like any other hobby, it can be as expensive, or as cheap, as you want it to be.

2. “It’s manlier”. Go ahead and think that if you want. I know everyone’s definition about what is “manly” is different, but when I think of a Man’s Man, he isn’t spending any kind of money or time on fancy grooming products.

So why get into it? The only way to justify getting into wet shaving is as a hobby. Like pipesmoking, collecting Star Wars dudes, playing video games, or any other hobby, it isn’t practical. You hafta just accept that you like the aesthetic of it, the smell of it, the ritual acts of it, and leave it at that. There is no way, that I can see, to justify it as anything short of an affectation. It is something that you “take on”, so to speak, not something you were taught to do, or is a practical fact of everyday life. It’s like Seinfeld said that time, “What’s with the chopsticks? You know they’ve seen the fork!” Just like using chopsticks at the Chinese buffet, it’s something that you must choose to do, just because it feels right to you and you simply like it.

It may seem that I’m trying to discourage anyone from pursuing this hobby, but I’m not. So far, I have found it quite enjoyable and it makes me look forward to shaving, which is a good thing (just ask the wife).  Like pipesmoking, it’s relaxing and makes me feel like a true gentleman… plus it smells and feels good.

If you are thinking of getting into it, I would recommend this guy’s videos on youtube. He seems to be the go-to guy for video tutorials on wet shaving. I have found his videos to be useful, hopefully you will, too.

Any questions? Want to disagree with me on the finer points and whatnot? Sound off in the comments below!

Happy Shaving and I look forward to seeing all of your fresh faces at Dragon*Con!

This entry was posted in About Fitness, About Me, General dorky shit. Bookmark the permalink.