Well, I’ve got the good news and I’ve got the bad news. I’ve always been a “bad news first” sort of chap, so that’s what we’ll do here…

The bad news is that I haven’t lost any weight in a while. In fact, I think I have gained a pound or two… and not in muscle. In heart-stopping, female-repelling, Conan-costume-ruining, FAT.

How did this happen? I recently turned thirtysomething. I blame it on that. Partly. The part that means that, as we get older, we can’t just run around town eating “bad” stuff willy-nilly and that the “bad” stuff intake must constantly be kept in check.

Unfortunately for my waistline, and future Costume Contest eligibility, I have been doing just that: running around town putting just any ol’ thing down my throat in a hedonistic maelstrom of unhealthiness.

I guess it really started with my sister’s birthday, which was about a week before Thanksgiving….

My body could be compared to Sloth from the Goonies: normally it is moderately docile (though not tamed by any means), but when it gets bad stuff (like Baby Ruth or Giant Burrito) it suddenly wakes up and turns into a full-blown maniac.

So on my sister’s birthday, we went to a buffet. Just to be clear, despite my girth, I am not a buffet kind of guy. But, when it comes time for birthdays and other celebrations, for some reason my family always goes to one of about 3 different buffets: The Seafood Buffet (one of the ones here locally), The Southern Food Buffet (not Golden Corral, a big step above that, but still…), or one of the ones that mixes those two popular choices. People in the South didn’t earn “Fattest State in the Union” by eating twigs and berries, I tell you that.

We went to this buffet, and I ate things there that any dead-before-his-time, 400-lb, Kentucky Colonel would be proud of. I didn’t eat anything fried (I know you were picturing fried chickens due to the Colonel comment), but I did have tons of sugar (no specifically-dessert items though). My mind and body woke up and remembered that they really, really, really liked sugar and fat.

Sine then, I’ve had a near-constant craving for the bad stuff. This has not been helped by The Holidays….

Cookie-Making Parties: I’m not a cookie maker, and I’ve always been partial to crackers over cookies, but when the wife brings home about a gajillion homemade cookies, who am I to question destiny?

Holiday Beverages: Christmas beers (which I’m a sucker for), hot chocolate (with a little Rumple Minze thrown in), and all manner of sweetened and fattened up coffees (no Starbucks, of course. Despite the BSG reference, I refuse to go to this evil place).

With all that said, and off my chest (because FFDC is all about honesty, folks. Otherwise, there would be no point), the good news:

I’m still hitting the gym. That’s right. In spite of the fact that I’m eating bad, and have gained some fat cells, I am still waking up and going to the gym to face down that gotdamn Whirly Bird and the ToT.

Not only that, but I’m actually making progress. I’m lifting more weight than I’ve lifted since I started this thing nearly 3 months ago, and I’m at nearly 50% difficulty on the Whirly Bird. You may say, “FFDC, dog, you may have gained a couple pounds in muscle, not in fat, especially if you are lifting more than usual.” Not so, my helpful and flattering friend. I can look at myself in the Mirror, Mirror and know that my belly has expanded a bit in the last month, even though friends and family tell me they can tell that I’ve lost a lot of weight.

One thing I’ve learned again is that Form is Everything when lifting weights. This is a lesson I learned a long time ago when I was mostly doing free weights, and learned, painfully, yet again when I took up the kettlebell.

If you are not using proper form, you are only hurting yourself (literally and um…. not literally). When I first joined the gym, form was not even on my mind when I was hitting the ToT. I guess I just figured that, since you are sitting down on the ToT devices, that form was not something I had to worry about. In a way, I guess I was right: it seems that form on the machines is not as important as it is with free weights… but it is still everything.

You may remember that I hurt my back at the gym on the ToT a week or two ago, and yes it still hurts a bit, and it was because I was not using proper form on the “sit down push up simulator” machine, whatever it is really called. Specifically, I was arching my back in an attempt to get up more weight. This put undue stress on some of my back muscles which were not meant to be pushing up that much weight, especially not when they were all twisted around like I was doing in an effort to “get under” the weight.

So remember kids: feet first, first time, and always keep your back straight when lifting weights.

And don’t eat a dozen Christmas Cookies in one sitting.

Here’s a bandwagon I’m getting on before it’s too late: 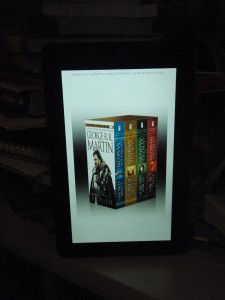 a picture of a picture

Yes, that is a photo of a photo of the A Song of Ice & Fire box set by George RR Martin.

This is the first book that I’ve ever read on an e-reader.

I got a Kindle Fire as soon as they came out, but up until I purchased this series of e-books, the only thing I used it for was to check the weather and watch South Park episodes via netflix while taking a dump.

Unlike a lot of geeks, I’m not that into technology. In fact, I sometimes have some serious luddite tendencies, as pointed out by a friend of mine. All that went flying out the window when I started this blog (which led to me starting both a facebook and a twitter account, two things I would have sworn 4 months ago that I would never do). As long as my computer is good enough for me to play MMOs on, I am fine with it.

But back to Game of Thrones….

I have been recommended this book by, at least, five different people whose opinions on matters of taste I trust. This, usually, has the  opposite effect on me: when people say “I know you will like this” my inner curmudgeon comes out and expresses itself as, “I’ll show you, I will not like this. You don’t know me so well!!!!”

This time, I listened. Mainly because I pre-ordered, via amazon, the Game of Thrones Season 1 blu-ray set as soon as I could (which was in September, before they even had a release date). I haven’t watched the show, but just from seeing it on tv a little bit, and hearing about it, I knew I would love it.

Time and time again, when I would tell people this, their response was, “You hafta read the books first!”

As an English major, this appeals to my inner “Books are better than Movies. Always.” side. If I am to continue to be this way, I can’t see the tv show first then read the book. I was advised that the first book, A Game of Thrones, is the first season, so I will finish the first book before I get the dvds… which won’t be hard since I’m over halfway done with the first book and the dvds don’t come out until March 2012.

So far I have found the book to be quite engrossing. The pace is extremely quick, unlike WoT, so you stay engaged the whole time. Plus the chapters are fairly short, not Kurt Vonnegut short, but short enough that you constantly find yourself thinking, “Well, I can probably read one more.” This almost always leads me to finishing a book in record time.

The pace is so quick, that there is a small part of me that sorta wishes it would slow down a bit and, forgive me, kinda thinks that the fast pace is a result of bad writing (if you have read this blog for awhile, you know that I have no place to call someone out for bad writing).

Well, maybe not bad, just a bit impatient. But, like I said, the quick pace really makes the book easy to read and engaging for the audience.

The best thing about reading it on the Kindle is that I can read it one-handed. Therefore, I can sit outside in this lovely cool weather we have in the Deep down here, and smoke my tobacco pipe with one hand, while leisurely reading GoT in the other. This makes for a wonderfully relaxing time, and is something that I have tried to make time for every day since I started reading this tale of political intrigue set in a fantastical world.

One thing I have heard from many people is that Martin is brutal to his characters (and thus to his readership) and that I shouldn’t ever get too attached to any of them. This is something you can easily infer just by reading the Prologue of GoT…. but regardless, there are definitely characters I am “rooting” for, and characters that I am hoping get their comeuppance in the most harsh and brutal way possible.

The only thing I can say about that is, “We’ll see…”

So, we’ll see if George “RailRoad” Martin desires a more realistic approach, or an approach that the readers all hope for. Either way, it will be enjoyable to see it all unfold… or at least it is so far.