Posted on October 5, 2011 by bayoubabylon

Actually, it’s about 329 as far as I’m concerned, since we plan on getting to Atlanta early on Thursday and getting our badges asap, then walking around and enjoying the atmosphere.

I heard that this year the line for getting your badge was not that bad, due to their new way of registering people. I know when we went in 2010, it took us about 6 hours to get through the line! It wasn’t that bad, we had a friendly neighborhood Ghostbuster to chat with, who wore his work clothes to stand in line for his badge. He must have just gotten off a hot case. Maybe at 1313 13th Street.

The JFZ today was fairly normal. I don’t have a central COC yet, but I do have a few: Birdshit Hair, Lumpy, Afro Puff. As you can see, my names are not that creative. In fact, they’re pretty much just descriptions of these people’s most prominent characteristics. I’m sure you can imagine what they all look like, just from hearing the descriptions.

I get the impression that the COC upstairs, where all the cardio devices are, is different from the COC downstairs, which is where all the weightlifting machines are. I don’t just mean that there are different people in each environment, I figure that much is obvious, but the entire vibe is different. I think the reason for this is because the people upstairs usually have in headphones, so they are in their own world. Their own sweaty, stinky, breathing hard, world.

The people downstairs, well…. it’s more like a bro-down.

What I mean is, the upstairs people don’t really talk to each other, but the people under the stairs really get down with each other. I mean, really get down. Sometimes while on the Trilogy of Terror machines, I feel like I just crashed a party that is for bro’s only. And since I’m not a bro, then I’m an interloper.

However! I get the feeling that, if I keep going, and the lions get used to me being there, that they’ll eventually get used to me and, possibly, even invite and/or accept me into their pride. (All this Wild Kingdom talk is a reference to an earlier blog about the gym ecosystem, which I’ll link to right now).

See, the lions are not disturbed by the presence of a lone wildebeest, brazenly striding into their territory to use their Trilogies of Terrors. They are not bothered at all by this, because they know that if the wildebeest does anything they don’t like (like talks to the she-lions, drinks their water, or yacks on the workout floor) that they can just eat him up at a moment’s notice.

They act like the wildebeest isn’t even there, in other words. Sure, they may look at him funny, or even talk amongst themselves (“Why is that wildebeest here?” “What does he want?” etc.), but the wildebeest is, definitely, not part of the pride. The wildebeest slowly works his trilogies of terrors, always keeping a weather eye on changing temperatures on the savanna (and I’m not just talking Fahrenheits and Celsiuseses here, folks).

Where the JFZ ceases to be the African savanna, and turns into a place where primitive humans can pay money to simulate work, is that a wildebeest can, eventually, be welcomed into the pride.

What must a wildebeest do, you ask, to become part of the elite squad of lions?

Step 1: wildebeest must be there every day, proving to the lions that he is not scared of them, nor of their complicated fitnessing units. Wildebeest must have drive, determination, and the eye of the tiger to, first and foremost, keep the lions from eating him immediately on sight.

Step 2: wildebeest must NOT disrupt the order of nature. This includes, but is not limited to, making a bunch of racket (with the ToT machines), breathing loud, taking a nap on the workout floor (i.e. passing out), wearing stupid clothes to the gym (jeans, loafer shoes, that shirt you have with “Pitfall” on the front), etc. The cardinal rule though, is to NEVER attempt to engage a lion in conversation without being prompted. And do not embarrass yourself. The lions will flee the scene if you yack or fall down (my two biggest fears while in the gym).

Eventually, by following these rules, it is inevitable that one of the lions will give you a friendly, “Good morning!” If it is late afternoon, this does not count because the lion who said this to you is probably crazy as a shithouse rat and has already been expelled from the pride and is wandering around aimlessly, searching for new pals… even a *gulp* wildebeest.

When this initial contact is made with the lions, wildebeest must give a polite, but curt, “Good morning” in return. No more, no less. You do NOT immediately spill your guts to this lion, words spilling out of your mouth unrestrained, like a garage full of dogs when their owners get home from vacation. This will frighten the lion, and startle it. A startled lion is dangerous as he could easily eat you, or at least call the other lions over for a good olde fashioned wilde-beatdown (please forgive me).

Continue following step 1 and 2. It will not be long before the lions get so used to you being there, that they will all be “Good morning”-ing you.

Once this happens, invariably one, or more, lions will approach you and want to say something besides pleasantries. Do not fear, wildebeest! You are only wilde-butthairs from being accepted! It is now that you must not fail in letting your future workout buddies know, through body language and words, that you are not scared of simulating work, nor are you frightened that they may tear your flabby wildebeest self limb-from-limb.

Lions can be cunning, and will use deception to expose the wildebeest’s weaknesses, so be on your guard. While one is talking to you (standing over you while you are in a submissive position, sprawled out on the JuJu Press), be aware that there are probably more lions that you don’t see. Frightening, I know.

If you remain calm, and stand your ground, the more you keep following steps 1 and 2, the more like the lions you will become, eventually changing over completely. But we can’t forget our roots, or what it is like to be wildebeest, or we may never reach fitness enlightenment.

Why do we care what the lions think? Who gives a crap about being accepted into a pride?

The wildebeest who does not want to be eaten.

“27 Days of Halloween” is not a countdown, if you were wondering. It is the title of the mini-column. A mini-column counting down the days until Halloween.

Today we will watch “Cat People”. 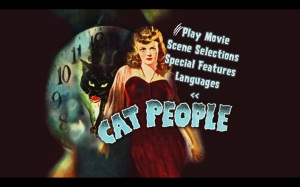 I got “Cat People” as part of the Val Lewton box set that I got a few weeks ago. Apparently, someone made a remake in the 80’s, but I never saw it. I have no doubt that it sucks.

Ok, the plot of “Cat People” should be pretty familiar to anyone who has dabbled in genre fiction before.

The main character, a lovely young woman (played by Simone Simon, both in this and in the sequel) named “Urina” (I swear that’s what it sounds like they are saying), has a fear that, when aroused by passion (either in the throes of love, or in rage), she may turn into a panther. Due to this fear, she is a recluse… until she meets a lovely young fella named Kent (played by Oliver Reed).

There’s some stuff about a curse, and some romance stuff, but really the plot moves along fairly swiftly. Like a lot of old movies, one minute Urina and Kent meet, the next minute they’re married… but not “doin it” because Urina is scared that she’ll turn into Cheetara and eat her husband up like a can of sardines. Clearly, this leads to problems in the marriage, so Kent turns to his ladyfriend coworker for counsel.

I think you can see where this is going…

(((possible spoiler here))) I don’t think you ever really find out if Urina turns into a panther or not, but to me it was obvious that she did. I never could tell if you were supposed to not know. Kent never realizes that she really can turn into a jungle cat and just thinks she’s crazy, so I think that maybe the audience was supposed to see it from his point of view, even though I’m certain that she is some sort of werecat motherfucker.

Where this movie succeeds is in the suspense, which is what I think most early horror films were based on. Hitchcockian suspense, ya know? Classic.

It also has some beautiful cinematography, which I credit to French director Jacques Tourneur. It is a classic film noir, which just means that it uses shadows and contrast to great effect in the film, and also has some “adult situations” involved.  Personally, I always associate film noir with gangster movies, but when applied to thriller flicks like this, it seems a natural fit.

The most famous scene is the pool scene. The other bottom of our love triangle, Alice, goes to a hotel for a swim in the pool. The pool is in the basement, and she is alone… or so she thinks.

Check out the fear in those eyes! We can all imagine the helpless feeling of being in a pool in the basement of a hotel… and a prowling jaguaro is on the hunt… for you! All we get are some low growls and lots of shots like this next one…

This is the closest we get, in this scene, to seeing the panther. We see shadows moving along the walls, semi-hidden by the patterns of the reflections of the water in the pool… and nothing else. Brilliant!

I know this goes without saying for most of you, but one of the things that I hate MOST about films today is that they feel like they must spoon-feed their audience all the information about every single thing in the movie. This insinuates that the filmmakers think we are stupid, and we are not and I refuse to be treated as such! /rant

Val Lewton was a producer who made a ton of great movies, and the studios loved him because he could spin gold out of the strands of a shoestring budget. He certainly succeeded in Cat People, and that’s why I chose it for inclusion in our “27 Days of Halloween” marathon…

Also, for those of you who really like this plot device…

There is a “Tales from the Darkside” episode called “Black Widows” which is pretty much the same thing, but with spiders instead of cats. I think it’s on youtube.

OH! ALSO, ALSO… I promised something big for tomorrow. Here’s a hint at what it’s going to be…

This entry was posted in About Dragon*Con, About Fitness, About Media. Bookmark the permalink.