Top 10 Outfits in Season 1 of the X-Files

Posted on September 14, 2012 by bayoubabylon

After we all came home from Dragon*Con, the Ancient Mystic Order of Dragon*Con Revelry (the AMODR’s) stayed in touch. During a conversation about X-Files, and particularly our thoughts on Gillian Anderson’s spacey panel, it was pointed out that, while some of the outfits and dialogue were kinda dated (for example: a friend of mine mentioned that a lot of things in the show would have been different if Mulder and Scully had had cell phones. Which is, of course, very true), the show had held up fairly well.

Now that I have finished re-watching season 1, I thought it would be fun to do a top 10 of my personal favorite outfits in the show.

While mostly I wanted to focus on Scully and Mulder, some of the truly great fashion statements are made by costars, guest stars, and other random people whom you never see again.

What follows is the top ten, coupled with various other screenshots that I took for posterity’s sake. 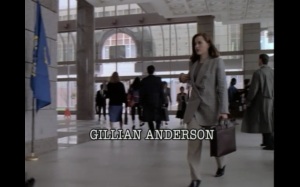 the first look at Scully

This is the very first time we see Scully in the show. She’s arriving at FBI headquarters in order to receive her new assignment: spy on Mulder and basically debunk the X-Files work. As we all know now, and probably knew even then, this part of her job didn’t exactly go as planned.

This plaid pantsuit (I think that is what this type of outfit is called) is fairly representative of what she wears throughout season 1. That is what makes it number 10, as opposed to number 4 or whatever. Its omnipresence is what makes it unremarkable, despite being so early 90’s it makes MC Hammer seem downright prescient.

Sure, the pantsuit changes colors and patterns, but eventually I got tired of taking screenshots of all of them, so you get this one, and you can imaginize the rest. 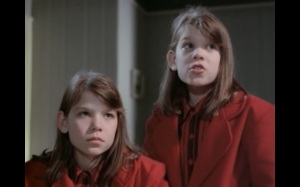 Whoever put these weird-looking little twins in these oversized fireman suits was on some shit. Red is the color of passion and violence, and these two menacing misanthropes are seconds away from poisoning their creator. Well, sort of. If you haven’t seen the episode, then you are missing out on two good outfits right here.

The reason they are not higher on the list is because I don’t think they chose these outfits. They were put in them, the way kids are put into their cute clothes. Anyway, they look like Screamin’ Jay Hawkins in Mystery Train. 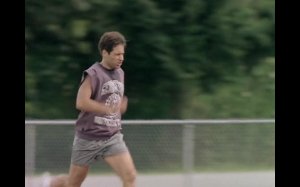 You’ve heard me mention Joan Jett before. It’s my nickname for a woman who goes to the JFZ and wears almost exactly what the Mul has on here. If Mulder had on legwarmers and a headband, he could have come straight out of 20 Minute Workout.  I seriously need to get a crewneck sweatshirt and cut the sleeves off about 2 inches from the shoulder.

It was really hard to catch Mulder in something besides classic shirts, ties, and blazers, but here we get a candid look at his fitnessing program. Look out, ladies.

I wish I could have gotten a full body shot of Seth Green doing his impression of Seattle in the 90’s. Here we have it: raggly-ass goatee, purple plaid flannel hoodie, shoulder length Pearl Jam, henley shirt, and an army jacket. Not seen: jeans with holes, suede skater sneakers (like Duffs or Airwalks or something).

Seth Green and his pot-smoking girlfriend snuck into a military base to just get high and “watch the air show”.

Let me get this straight… a stoner dude, on a scooter, with his stoner girlfriend, snuck onto a restricted military base to get high and watch UFO’s? This sunuvabitch is exxxtreme! In fact, I think he says that.

06. The telekinetic woman in almost every scene she is in. Episode 5: Shadows 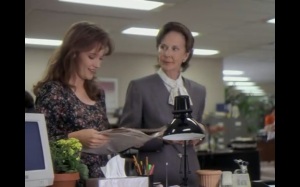 Telekinetic woman and other woman.

The first picture is really just about the other woman. For one thing, telekinetic woman is seen here wearing a flower print dress. Like Scully with the Gayfer’s pantsuits, the flower print dress is constantly popping up in the first season. Eventually I started ignoring them. The other woman’s bowtie thing is pretty awesome though, especially coupled with that deep woods pentecostal hairdo. She is clearly the Heavy in this scene. Therefore telekinetic woman is forced to Professor X some hot coffee all over her! Ha!

In the second picture, she has on a vest with embroidered sailing boats on it. Also, high booty pants.

Telekinetic woman isn’t a bad guy, she just can’t control her powers sometimes. A bad guy would not wear an embroidered vest like that, which I’m sure is why the costume department put her in it. Vests pop up all the time in season 1, mostly on women, and they are awesome.

I know I kinda snuck two entries into one here, but if you want to stick to the rules, you can go hang out with that guy who said I shouldn’t eat bananas. You can also scour the entire 24 episodes of season 1 yourself and make your own top ten. I’ll read it.

Everyone I knew had a jacket like this. Triply bright colors, can zip up past your head for some reason, and is meant for some sort of snow activity. In the early 90’s, that probably would have been skiing and snorting cocaine, at the same time. Why? Because a lot of people confuse early 90’s stuff with 80’s stuff, that’s why.

She also has on furry boots and her pants tucked in. Nice.

04.5. You know you’re in the outdoors when this guy shows up…

This is more of a haircut shot than a outfit shot, but this dude is clearly ready for outdoor adventure. My indoorsmanship bars me from ever having a haircut like this. Plus I have no desire to be Snake Plissken.

Tooms, a recurring character in the show, is stalking this broad. Maybe if she didn’t wear such ultra-loud skirtsuits (?) while everyone else is wearing black and white, she wouldn’t have a problem.

This may be the most early-90’s outfit that I found in the first season… and it’s on a no-name character we never see again! The turquoise skirt with the purple coat would have come straight from the local department store’s “Miss” section, stylish but sassy. It also could have stepped right out of a Color Me Badd music video.

But check out that hair. The hair makes it. It’s like a mullet and a mohawk and a flock of seagulls all mixed together. There’s just something about this lawyer that really intimidates me. I think something about her facial structure reminds me of the softball chicks at my high school who could totally have kicked my ass at any given moment. This lawyer could definitely put away a meatball sub and then go hit homeruns. 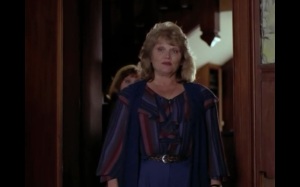 This woman got completely screwed by the costuming department. Every time she shows up, she has on some kind of crazy patterned silk thing, each more outlandish than the last! I really would like to know what they were going for with this character’s fashion decisions. Maybe that she is friendly and outgoing? Who knows. But her outfits are louder than a match in a fireworks store. And she looks like Sally Struthers (it’s not her, I checked).

aaaaand my favorite outfit of Season 1 of the X-Files is:

1. Scully in a leather vest and high booty jeans

It’s so nice to see Scully chilling at a kid’s birthday party with a woman in a flower print maternity dress! Gone are the various pantsuits! The severe hairdos! The business purse/satchel thing!

In their place, to accentuate that Scully is ready to party 2nd-grader style, are a leather vest, black mom jeans, and a casio calculator watch.

Here are various other contenders for the top ten, which didn’t make it. What do they call that? 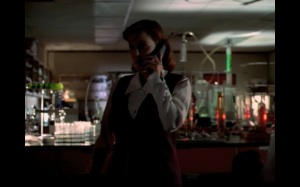 a vest and a one piece speedsuit. 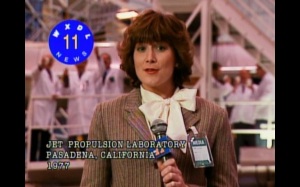 That’s it! Hope you enjoyed it!

This entry was posted in About Media, General dorky shit and tagged fashion, mulder, scully, x files. Bookmark the permalink.