Well, to hell with Movember, I shaved my beard off. My mighty beard, which I had started while in Ireland, finally got on my nerves so much that it now resides in a plastic sack in the bathroom rubbish bin. Why would a person, who is lucky enough to be in a profession where it doesn’t really matter what you look like, and who has a keen interest in Fantasy, Dwarves, and Norse mythology, shave their beard off?

1. Felt weird/bad. In the mornings, when I would wake up, the beard always felt crusty or something. Gross. I don’t know if I drool a lot in my sleep (I’ve suffered from terrible sinus problems since childhood, which would lead to sleeping with your mouth open, which would finish with excessive drooling. I attribute these sinus problems to living in a place with 100% humidity EVERY FRACKIN DAY. This town consistently has the 2nd highest amount of precipitation in the USA, next to Seattle, and we even beat them sometimes. Couple that with extreme heat, bugs, and all the golden rod and fungus and spores that you can shake a stick at, and you get an allergy nightmare…. from which you never awaken, bwa ha ha!)

Ahem. Where was I?

The thing is, I never could get that gross feeling out. I tried washing it every day, putting conditioner on it (which sometimes helped, but most times just made it feel slick and slimy), and even putting wax/gloss on it. None of this ever helped it not feel disgusting (I think I once compared it to roadkill, which wasn’t too far off the mark).

Also, sometimes it would itch and hair would get in my mouth. I tried waxing my moustache, but that only got some of the hairs out of my mouth, not all. Speaking of, you may think that the moustache wax reviews are now over, but I tried numerous waxes while I had my beard/stache, so there will be more reviews coming eventually.

2. Wife hates it. This is both a reason to keep the beard, and eventually, a reason to shave it off. You can ask any guy with a beard and he’ll tell you, “Yep, wife hates it. I love it.” Clearly, there was no way I could have listed this as the number one reason for shaving, else my Dood credentials be permanently revoked.

A wife claims that the beard scratches her face during kissy moments and that the hairs get in her mouth, which I can admit would be a turn off.

Being as I’m a red-blooded dude, around the age of 12 or 13 years old, “Gettin Some” supplanted Christmas for top spot in my brain and has ruled with an Iron Fist ever since. So the beard has got to go.

3. The beard was way more trouble than any other part of my body. As in, it took a lot of “fixin'”. Several times a day, I would put a little wax on the stache, brush the beard, comb the beard, examine it for parasites, and, in general, try my best to remain looking like a well-groomed gentleman… with a big burly beard.

I would always see these guys in the store: giant beards, but still looked well-groomed and “together”. I look the opposite of “together”. I look “apart”. All the time. I don’t know why I thought I could pull off the well-groomed beard look, but I did. I don’t know how those guys do it. Their beards are always neat, never fro’d-out like mine, and the hair lays straight and looks soft. My beard looked like I had a tumbleweed glued to my face, no matter how much product I smeared into it.

I would share some pics of myself sans-beard, but since I try to remain anonymous on the ‘net (useless, I know, but at least I feel better about myself if I make an attempt, however futile), there are no pics on here of me with a beard, so pics of me sans-beard would be pointless and have no frame of reference.

Speaking of pics, yesterday was the two-month anniversary of FFDC.com, and as you know, this means pictures of my progress towards playing Conan in the next Conan movie, which will be titled “Conan: the Flabby and Half- Blind” and feature me, as Conan, beating a rowdy tribe of feral senior citizens to a pulp. 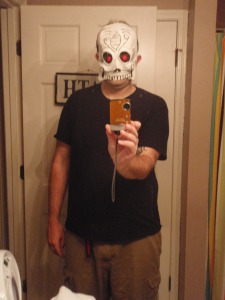 I’m not gonna lie. These pictures are disappointing. You can’t really tell that I’ve lost any of my beer gut over the past month. I feel like I have, and my britches are fitting looser, and I feel a lot better in general, but the pictures don’t lie, and I still look like a tubby piece of shit. Fuck pictures.

Have I been forgoing beer and Christmas treats for this??? To look exactly the same after a month of going to the JFZ regularly and eating only twigs and berries and protein??? GODDAM IT.

I swear, it’s photos like these that make me want to burn down the JFZ while eating a potato sack full of buffalo wings and drinking a 5 gallon bucketful of Guinness.

At my age, you can’t stay mad too long before you get tired and burnt out on it. I think that’s why my musical productivity has taken a nosedive over the past 5 years or so. As they say, comfort is the enemy of creativity.

Maybe I need to step it up a notch or something. But I can go ahead and tell yall, I’m not going to spend all day in the frackin JFZ, or working out any-f’n-where. There has got to be time for playing Warhammer Online, LoTRO, and watching Tales from the Darkside dvds. So what to do? Can’t starve myself, can’t spend all day fitnessing.

Any suggestions would be appreciated, but don’t get all preachy on me or I’m liable to throw my computer out the window… then you gotta explain that one to my wife. How you made me do it, you devil you.

6 Responses to During Pics for November, Beard Shaving, etc.