Something’s wrong when you wake up in the morning and you’re relieved, and a bit surprised, that you don’t have a flat tire.

Yesterday we looked at pictures of Oin and Gloin, the two best pictures out of the bunch of pictures released from the Hobbit movies. Even though they are completely different than I ever would have imagined them to look, from reading the book, literally, hundreds of times.

I know I probably shouldn’t do this, but I want to quote a bit from the Hobbit, regarding the first time we see the dwarves, as they arrive at Bilbo’s house.

It was two more dwarves, both with blue hoods, silver

belts, and yellow beards; and each of them carried a bag of tools and a spade.

In they hopped, as soon as the door began to open-Bilbo was hardly surprised

said the one. “And Fili! ” added the other; and they both swept off their blue

“At yours and your family’s!” replied Bilbo, remembering his manners this

“Dwalin and Balin here already, I see,” said Kili. “Let us join the

“Throng!” thought Mr. Baggins. “I don’t like the sound of that. I really

must sit down for a minute and collect my wits, and have a drink.” He had only

just had a sip-in the corner, while the four dwarves sat around the table, and

talked about mines and gold and troubles with the goblins, and the

depredations of dragons, and lots of other things which he did not understand,

and did not want to, for they sounded much too adventurous-when, ding-dong-aling-

dang, his bell rang again, as if some naughty little hobbit-boy was

trying to pull the handle off. “Someone at the door!” he said, blinking. “Some

four, I should say by the sound,” said Fili. “Be-sides, we saw them coming

along behind us in the distance.”

hands, and wondered what had happened, and what was going to happen, and

whether they would all stay to supper. Then the bell rang again louder than

ever, and he had to run to the door. It was not four after all, it was FIVE.

Another dwarf had come along while he was wondering in the hall. He had hardly

turned the knob, be-x)re they were all inside, bowing and saying “at your

service” one after another. Dori, Nori, Ori, Oin, and Gloin were their names;

and very soon two purple hoods, a grey hood, a brown hood, and a white hood

were hanging on the pegs, and off they marched with their broad hands stuck in

their gold and silver belts to join the others. Already it had almost become a

throng. Some called for ale, and some for porter, and one for coffee, and all

of them for cakes; so the hobbit was kept very busy for a while.

-from the Hobbit, “An Unexpected Party”

Many people have postulated that the pictures from the Hobbit, that we have seen, are of the dwarves after they Occupy the Lonely Mountain, meaning that they are “geared”. However, judging from this photo (presumably taken from the scene quoted above. since that is the only time the dwarves are in Bilbo’s home), it looks like these dwarves show up ready to kick some goblin ass.

Now, I wouldn’t consider myself a “purist” but I would say that I thoroughly enjoy the differences between the Hobbit and the LOTR stories. The Hobbit is set many years before things really start turning to shit in Middle-Earth, so it can be presumed that the dwarves probably wouldn’t show up on Bilbo’s doorstep in full armor. In fact, I would guess that they didn’t really expect any real trouble until they got to the Lonely Mountain and had to actually face Smaug, whom they thought might even be dead, since no one had seen him in ages.
In other words, I want to see dwarves with long, wagging beards and colorful cloaks with hoods! That’s all I ask. Add all the hot elves you want, just give me some sweet dwarf beard action and cloaks and hoods and shit, and I’ll be satisfied with the Hobbit movie.
Well, maybe some good old-fashioned Shire action, also. Like some good shots of hearths, green fields, country lanes, pipe-smoking, ale-drinking, and just generally the clean, easy-livin’ Hobbit lifestyle.
Anyway. Here’s today’s dwarf picture to be scrutinized as though I could do better: 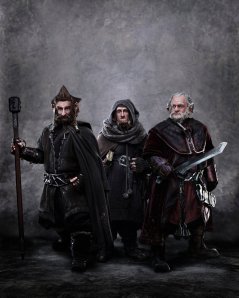 This is some pretty good dwarf action. Ya got two dwarves who are ready to kick someone’s butt, and one who looks like he would rather just be at home, kicked back with that book he’s got in his hands. What do you think that book is?
Even though I’ll concede that there are probably dwarf scholarly types out there somewhere, I don’t think there are any hints that Nori is like that. So unless that is a book of dwarf recipes, a book about mining techniques, lessons on how to do proper ceremonial dwarf dances (which are absolutely nothing like that fizzlebutt dance that Jack Sparrow did at the end of Tim Burton’s “Alice in Wonderland”), or beard grooming tips (he looks like he could use some).
He might could get some good advice from the starfish on the left, who appears to be holding a cannon plunger. Are dwarves into heavy artillery now? I don’t want to rip on Starfish too much though, since he’s the best of these three, to me.
The one on the far right, Ori, I presume, isn’t too bad. He’s just too ready for a fight for me.
These dwarves should not be carrying giant anime weapons and armor. They should be carrying tools, backpacks full of food, and water skins. 90% of the book is the journey to the Lonely Mountain, and there’s no way that the dwarves did not realize this.

Another one of those, “if you were between the ages of 3 and 15 in 1986 you already know this, but if you were not, then you have no reason to care” things.

Mr. Boogedy was a made-for-tv movie that aired on “the Wonderful World of Disney” during the Halloween season of 1986.

“The Wonderful World of Disney” was a weekly show that featured original programming made by Disney.

“Mr. Boogedy” is a film that we all saw, but no one ever had because it’s never been released on home video due to rights reasons. Fortunately, it is on youtube, along with everything else, apparently…

(((I’ll let you follow the links to the rest of the movie. I believe you can handle it.)))

Mr. Boogedy, now that I’m re-watching it as an adult, is not as light-hearted as I thought it would be. I was thinking that Mr. Boogedy would eventually turn into a good guy, or at the very least be a sort of “misunderstood” ghost, like in the 6th Sense or something.

But no, Boogedy is pretty much a bad guy throughout the film.

Is there any question when you see him that “Mr. Boogedy” is deadset on being a bad guy?

Boogedy here looks like he’s seen a ghost! HA!!! Actually he looks a little disconcerted about whatever is going on in the upper corner of this room. Boogedy might be having an acid flashback here.

How will they stop this Boogedy??? He’s got the lightning fingers!!! I wanna make some Emperor Palpatine reference here, but yesterday I watched the updated “Max Rebo Band” scene in the “reimagined” version of Return of the Jedi and now I don’t feel like saying anything positive about Star Wars ever again.

Maybe a Ghostbusters reference. Like maybe Boogedy vs. Gozer in an all-out mud-wrastling, no-holds-barred, event? That’d be a good match. Boogedy would wipe the floor with that Vigo the Carpathian guy from the second one.

“Mr. Boogedy” is pretty much just a typical haunted house flick. It was supposedly for kids, but it’s easily enjoyed by anyone who would enjoy such cinematic masterpieces as “Saturday the 14th” or “Transylvania 6-5000”. Like me.

A family moves into a haunted house in New England that is haunted by a dead warlock with the nice-guy name of “Mr. Boogedy” (who owns the insanely popular catchphrase, “Boogedy, Boogedy, Boo!!!”).

Most of the comedy comes from dad, who makes his living selling novelty items like the stuff you could order out of the back of Boy’s Life magazine or comic books.

My favorite? The mail-order monster.

Mr. Boogedy is also a bad guy in that, not only is he haunting this nice family, but he’s also, somehow, keeping a lot of other ghosts prisoner in the house. I think that’s the plot of every episode of “A Haunting”.

Watch Mr. Boogedy. Enjoy it and thank God for youtube and whoever took the time to upload it there, because it’s doubtful it’ll ever be released on video by Disney. They’re too busy making “Bambi 4” and “Beverly Hills Chihuahua 3”.