the Hobbit Pictures Part 1 & Haxan: Witchcraft Through the Ages

Either way, I have done something to anger the gods of Goodyear.

Today I’m not even going to mess around with this “patching” shit, because obviously that is completely worthless. Time to just man up and buy a new tire. Lame, because tires are expensive and take money away from important things like “Tales From the Crypt” box sets.

Also, my buffalo wing eating didn’t work out. As usual, the fine print got me. If I had been surprised, I would have been pissed, but since nothing like that ever works out for me anyway, it was no big deal. But it is funny because I’ve been building it up on this site, and in my head, ever since I got that worthless piece of paper that I thought was a coupon for a buttload of free buffalo wings.

At this point, I was in a conundrum. My fitfordragoncon plan does not include paying for buffalo wings. But yet, I’ve already driven up to the place, went inside, and stood in line… Did I do all this to leave empty-handed? Worst of all, my mind and body were literally shaking with anticipation of tasty deep-fried chicken and hot sauce goodness.

In the end, my dedication to fitnessing would not allow me to pay for buffalo wings. So I went home and ate an apple and some eggs. A poor substitute.

It’s old news now, but the Hobbit by JRR Tolkien is going to be made into a movie. 2 of them, in fact. I think the first one is due out next year and filming has already started.

This is, obviously, huge news for me and all the other Tolkien fans out there. Being as they are to be directed by Peter Jackson. I’m hoping for the best, though I do think that del Toro would have been better. But that’s just personal opinion because, in general, I like del Toro’s movies more than Peter Jackson’s recent material. This doesn’t include such gems as “Brain Dead” and “Bad Taste”.

The pitchers that follow are extremely old news, at least in the world of “the Hobbit movie news”. But I felt like you needed my opinion on them.

Because I am honestly surprised at how much my fellow geeks like them.

And, even though I’ve mentioned this before, I’m constantly surprised by how eager my fellow geeks are to swallow the horrible shit that Hollywood is marketing towards them. Personally, I am insulted by all these terrible superhero movies, remakes, and attempts to appeal to my sense of nostalgia. We are SMART, geeks! That’s kind of our modus operandi, isn’t it? Why do we let ourselves be patronized by these idiots who, for years, would not give us the time of day… until it became profitable to do so?

Luckily, Peter Jackson is a true-blue Tolkien fan, or at least it seems like he is. Despite what you may have thought of the LOTR movies, they are as good as it’s going to get, especially the extended versions. I can’t help but laugh when I hear/read someone say something along the lines of, “I’ll keep waiting until a better version [of the LOTR films] comes out.”

Laugh out loud!!!! Don’t hold your breath, motherfucker! If you’re waiting for Hollywood to make a better (i.e. closer to the book) version, all I can say is that you’re a fucked chicken.

This is going to hafta fall into 2 different posts, because I don’t feel like writing 3 million negative words about something I love. No doubt, I actually do like some of the photos.

We’ll start with the best ones, which were the first ones they released… I think. Don’t be a dousch nerd and feel like you must correct me if I’m wrong about that. 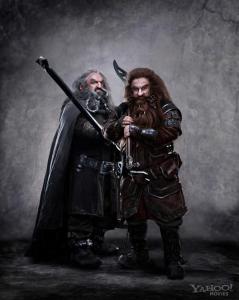 I obviously didn’t take these pictures myself.

Now these are some dwarves! When I first saw this photo from the film, I got ridiculously excited. So much so, that I immediately emailed this picture to everyone I know, including the people who are not a bit interested in anything. Imagine emailing this picture to your grandmother. That’s what I did. Just sent it to everyone who has ever been on my contact list. Old college buddies that I haven’t talked to in 10 years? Yes. Relatives I haven’t seen since Christmas of 1998? Sure.

Who doesn’t need a sweet photo of two badass dwarves??? Well, I guess my grandmother probably didn’t need that.

Speaking of things that people need, EVERY dwarf should have a beard that flows from their jowels like the pudding pops flow from Bill Cosby’s benevolent hands. A braid or two doesn’t hurt, but they are not necessary… what is necessary is that the beard is flippin sweet as shit and, dare I say it, epic.

I’m not up on my Tolkien lore as much as some people, but I think that dwarves spring out of the ground like a groundhog when they’re born. I think the lore says that they are born from the earth, sons of stone or something. The Silmarillion gets into their origins, but it’s been a while since I’ve read it.

That said, a dwarf should not ever be without a beard. Ever. There should NEVER be a point in a dwarf’s life when he does not have a beard, no matter his circumstances or his age.

Every dwarf should look like they could be in the dirtiest, grungiest, heaviest, stoner metal band of all fucking time.

I think that is the root of my problem with the look of the dwarves: not all of them give me serious beard-envy, and I need some beard-envy when I go see a fantasy epic. And some ideas on what to do with my beard once it gets long enough to braid into funny shapes, like “round”.

Haxan: Witchcraft Through the Ages (1922)

Yesterday we watched just a bit of this movie. Some kind soul has uploaded the entire film onto youtube (you may need to go there to watch it, if it doesn’t work here).

I like the description here as a “documentary”. Even if you’ve only watched the few minutes from yesterday, you know that this is no documentary. Unless there really is footage of a woman giving birth to Rosemary’s Baby and a bunch of women dancing with Satan and some demons. I realize that, by calling the movie a “documentary”, that it is really only more like a “history of”, and even then, it is from the standpoint of the producer and director of the film, Benjamin Christensen (who plays the debbil in some parts of the film, including scene that my cousin can imitate hilariously).

This would better be described as “anti-witch propaganda”, which is what it was. People were still really scared of witches in the early 20th century, and Christensen felt it was his duty to remind all us good, anti-heathen folk to remain diligent against our common auld enemi, the Satan.

I know that this movie is not “Halloween-y” in the same way as the other stuff we have watched and, inevitably, that means that most of you won’t bother watching it (it’s also in b&w and silent, which is a major turnoff for Bama fans). My wife hates this movie. She may actually think that this is the most frightening movie in my collection.

What do I mean by Halloween-y? Well, for starters, it’s not going to be nostalgic for anyone to watch this movie. I don’t think that even my grandparents were alive when this movie was made. But I do like to picture some internet-savvy centenarian, hitting his/her/it’s knee and exclaiming, “Oh snap! I remember that shit!” It also doesn’t feature any instantly-recognizable Halloween iconography or activities.

However, this could be seen as the most Halloween-y film that we’ve watched so far, or will watch, for that matter. That is, if you catch my drift and all…

I have this flick on Criterion Collection at home, and it includes a version that was cut and released in the 60’s and features, for all you literate types, a commentary by William Burroughs. The Burroughs version is good, but I would really just rather have the original with the original score.

I think it is interesting that the film was released in 1922 because right now I’m reading a book called “A History of Witchcraft and Demonology” that was published in 1922 by a guy named Montague Summers. He was a very interesting sort of chap who fancied himself as a modern-day Witchfinder General, a direct heir to Cotton Mather and the early witchhunters of the 17th and 18th centuries. Summer fully believed that the Salem witch trials were a great thing, and had become necessary to stamp out heresy and Satanism in the Colonies. He also believed in vampires and werewolves, which he felt like it was his duty to exterminate. I strongly suggest you look this crazy cat up, if you get this chance, but I wonder if there is any connection between his book and this film, or if it is just a strange coincidence.

All in all, this is one of my favorite films of all time, and definitely my favorite silent film. I love everything about it. The hysteria of the propaganda side of the movie, the seriousness with which the filmmakers approach the subject, the INCREDIBLE special effects… all of this really lend it a sense of credibility that a similar movie would not have today.

We believe it is real because it looks old, in other words.