Day 1: About the Abouts Part 1: About Me

Posted on September 14, 2011 by bayoubabylon

Those of you out there who live in the net are probably familiar with the way that blogs work. But for the rest of us, I wanted to point out that there are “tags” or “categories” at the bottom of each blog post that help you find the content that you are seeking, that all your will is bent on. The tags that you will find on fitfordragoncon.com are as follows: “About Dragon*Con” (dealing with D*C related topics), “About Fitness” (dealing with exercise tips, eating tips, etc.), “About Me” (you will learn some stupid piece of useless knowledge about me, like that I once was on a Q-Zar tournament team. a fact that even one of my best friends did not know until recently), and “About Media” (movie reviews, stuff about music, books, etc.). An ideal fitfordragoncon.com post will include all these tags.

Today I am going to discuss About Me. Do not fret, dear blog reader, this will be brief.

Once upon a time, I was a carefree youth who lived in the downtown area of a city. I didn’t have a car so I walked or rode my bike everywhere. I was fit as a fiddle! I spent most of my time playing in bands and working in pizza places. Then, I got married, moved back to my hometown on the Gulf Coast, got a “real” job with a local shortline railroad, and wasted no time in getting fat as all hell.

That’s about it. Or at least as much as I’m willing to share right now, as I realize that “personal” blogs are almost, but not quite, as self-indulgent and retarded as personal fanzines (of which I have been guilty of a long long time ago). I just felt it was important to know a little backstory, so you can get a sense of my voice and shiiiiiii.

It is at this point that I would like to share my first “Before” pictures with you. I know a blog like this requires the obligatory “shirt off, gut out” pics, but there is no way in hell my obscenely low self-esteem and well-cultivated sense of natural propriety would ever allow me to do that.

If any of you have “Before” pics that you would like to share with me, I’ll gladly post them as we all join in this quest for fire together.

And no, I’m not the hideous Duck Man of the South, I have on a mask. A Duck one. Don’t judge.

"Quack, I need to lose some weight, Quack!"

One from the side so you can truly get a sense of the girth we're dealing with here.

So, I can’t promise anything, but sooner or later I’ll post some more pics to, hopefully, document my journey from zero to superhero. I would really like to have some cool costume to wear this year. At this point, about the only thing I could be is that toad guy from Thundercats. What was his name? Sly or Slyth or something? Anyway, that guy. A fat gremlin.

On a side note, has anyone seen this movie? Fortress???

((ok. so, seriously. I just typed a TON of text in between these pics and for some reason it got deleted. I’m new to the blogging game, so I’ll just assume that I did something wrong. Not that wordpress sucks, so that I don’t have to call someone and then reach through the phone and strangle them to death. And not that my computer sucks, so I don’t hafta beat it to a shiny pulp with a sledgehammer. I will try to replicate it, but I assure you, the text that is floating out there in the internet ether was pure gold. This will probably be more like bronze… or maybe even nickel.)))

A good family movie for scarring kids for life!

Fortress is an Australian movie about a teacher, played by Rachel Ward, who one day has a bunch of bad dudes in masks, including the leader bad guy in a “Father Christmas” mask (those wacky Australians!), roll up into her classroom and take her and all her students hostage, presumably for ransom money. One of the guys is wearing a Duck mask (in fact, several of them are wearing animal masks. it’s very Wicker Man), which is why I wore a duck mask in my “before” pics (you’ll hafta wait for the “after” pics).

See, Rachel Ward and Co. are not just going to die like animals. No! They came from the Lord of the Flies school of dance, which means that they will FIGHT!!! They fashion some spears and crude weapons and kill all the bad guys ewok-style. As in, with spears and shit. Brutal.

At the end of the movie, we get a shot of Rachel Ward, teaching her class outside under a tree, and a cop or someone pulls up and asks if the yare all ok. They all answer in a entirely-too-innocent, “Yesssss.” It then pans over to a shot of where the kids have put some of the bad dudes parts into Mason jars for preservation, like they were frackin figs or something!

Anyway, this movie is legendary among people my age (ahem. early to mid 30s). For some reason, we all saw this movie as a kid and it freaked us the hell out! I don’t know if it was just on HBO all the time, or if it was just one of the first movies to come out on VHS tape (after the great BetaMax vs. VHS War of the early 80s), but everyone saw this movie.

I remember it clearly: It was right after VCRs had become available to middle class folks such as ourselves, and my dad was in a video trading club at work (I would kill to be in video trading club at work now. It would never work at the railroad, unless I wanted to see the Fast & the Furious movies back to back. And not the original Roger Corman one, either. The white trash ones.). He brought home a lot of tapes that someone had just recorded off of HBO (in the pic below, the VHS tape is clearly labeled “HBO Video” or something like that. I can’t scroll down and look. I’m busy.). This was on one of them.

See, you kids today have it easy. Netfliz and hula and whatnot. Before the glorious advent of home video, successful movies (and I mean REALLY successful, like Snow White or Ghostbusters or something) would just re-release to the theatres every so often. So when it happened, you packed up the kids and you all went to the theatre to see Snow White or the Fox & the Hound. This is a good reason why Ghostbusters still holds the record for movie that I have seen the most times in the theatre (six), and also is the grand champion of movies that I have seen the most times period because, as fate would have it, we got a VCR right before Ghostbusters came on tv and I taped it! So, for most of my childhood, what I heard, as Venkman comes busting out of the ballroom after successfully “busting” Slimer, instead of “We came, we saw, we kicked its ass!!!” was “What a knockabout of pure fun that was!” I’m not even kidding. I wish I were.

Ahem. Anyways, back to the Duck guy from Fortress. Today, and every Wednesday, I volunteer at a museum downtown. I meant to go somewhere today and get a mask for my “before” shot, but noticed that we had a bunch of animal masks in the gift shop. As soon as I saw the duck one, I knew I had to have it. It brought back memories of Fortress. Golden memories of childhood, when little boys were one step above bloodthirsty pygmies and teachers were willing to lead their classes in an all-out massacre of bad dudes.

So, here’s a pic of the duck guy from Fortress. Only now do I realize that my mask is not like his.

What do you suppose Leader Bad Guy Father Christmas is telling our semi-retarded-looking duck friend right here? Probably something along the lines of, “Tighten your shit up, Duck Person! Or else these kids and their teacher are gonna go all ewok on us and stick us to death with sticks!”

I don’t know what Duck Man did to deserve such treatment. Probly ate the last beef jerky or something. But gah, Father Christmas, why ya gotta be such a dick? Oh yeah, because you are the leader of a band of bumbling criminals from Australia. You win.

Two pics above is a shot that shows Rachel Ward cowering for her life. I think that makes her look more like a victim than she really is in this movie. 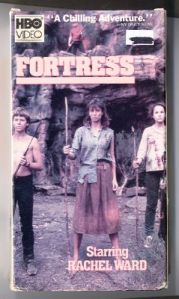 the Battle for Endor

Clearly, Fortress is not a movie to be trifled with. Highly recommended for people who can get in their Tardis and go back in time and watch this movie when they are between the ages of 5 and 10, and who were already borderline obsessed with the movie “Red Dawn”.

So, how does Fortress fit in with my “fit for Dragon*Con” theme??? Did you not read me, man??? It is a movie NOT TO BE TRIFLED WITH. Much like my fitness regimen and new eating habits!!! I will attack my weight problem like a band of savage 5th graders with the beginnings of a nasty little moustache and stinky underwear…. that is , savagely! Fear does not exist in this dojo.

Speaking of fitness, here’s what I ate today:

For breakfast, I had a bowl of Honey Bunches of Oats with Strawberries (which they should really call “Flakes that get soggy too quick with a microscopic amount of astronaut food and not a trace of an oat to be found”). This was with the fat free milk, which I have always preferred, even when not getting fitfordragoncon.com.

Between breakfast and lunch, I enjoyed a handful of Emerald Brand Cocoa Roasted Almonds and a few Zapp’s “Cajun Crawtators” potato crisps (I still have a ton of junk food left over from a recent Battlestar Galactica party I hosted. I refuse to throw it away. My plan is to eat it eventually, but not a lot in one day).

Lunch was chicken and rice. I baked one of those terrible frozen chicken breasts that you can buy by the sack and boiled some minute rice. I never said I was Food Network material. I flavored the whole mess with Dale’s secret salty soy sauce and Tony Chachachachacere’s creole seasoning.

For exercise today, I went to the gym and did 30 minutes on the ellyptical. After which I thought I was going to expire. I am OUT OF SHAPE, get it? I also walked around the museum a lot today while volunteering. I don’t think that counts. Well, it won’t later, but this early in the game I gotta score the exercise points when I can get em. Anyway, more on the exercise tomorrow, when we discuss the “About the Abouts Part 2: About Fitness.” See you then and keep thinking Dragon-y thoughts.

This entry was posted in About Dragon*Con, About Fitness, About Me, About Media. Bookmark the permalink.

3 Responses to Day 1: About the Abouts Part 1: About Me