There were several things that I wanted to mention today, but I don’t think I can flesh any one of them out to my usual length, so I figured I’d hit all of them, briefly. Coming up with a title for a post like this is hard, but since tomorrow is Turkey Day, I figured I’d put the keywords “cooking” and “turkey” in there in a pathetic effort to get more traffic than the 3 of you who check this thing erry day.

I’ll go ahead and list the topics we will be covering today, so that you can go ahead and decide if you want to proceed:

1. Cooking a Turkey and Eating Healthy during Thanksgiving

2. the Muppets movie that comes out today.

3. My Workout Today at the JFZ

I could probably come up with a few more little things to shit about, but I have a lot to do today. That said, let’s get right to it:

1. Cooking a Turkey and Eating Healthy during Thanksgiving

Today I will cook a turkey. A whole beast, roasting right there in our oven. Her (it’s a hen) short life snuffed out in a blinding flurry of hormones, chemicals, and the feces of her fellow doomed comrades. All to end up as the main event on a holiday when fat Americans, such as myself, celebrate their fatness and decadence by eating slightly more than they consume on any other day.

With that in mind, I think I really loved Thanksgiving more when I was poor. I’m not rich by any means now, but I can afford to eat, basically, what I choose to eat, rather than having my diet dictated by my meager budget. Every day of the year, living far away from home, I ate cereal for breakfast (that really hasn’t changed), a pb&j sandwich for lunch, and a can of soup for dinner. Then I would come home for Thanksgiving and be treated to tons of home-cooked food, and as much of it as I could hold! Turkey Day just does not pack the “umpf” it did when it was the only day of the year that I got to eat as much as I wanted of tasty, fresh food.

Still, it is quite fun to have an excuse to overeat. Especially when you are trying to get fit.

Turkey (and chicken too) has the distinction of being something that you can eat while you are on a diet or trying to get fit. Which is good, because during the holidays you won’t feel like you are missing out on too much. I really wanted to do a review of different cranberry sauces, but it doesn’t look like that will happen, only because I don’t feel like going to the store and buying four different cranberry sauces, opening all four of them up, and sampling each one.

But turkey… now there’s something a fella can talk about, even if he’s only ever cooked one turkey before in his life!

Cooking and carving the turkey is something that is definitely a “man thing”. I am assuming it goes back to when people had to shoot a wild turkey (don’t mind shooting some Wild Turkey every now and then myself, thank you very much, heh heh heh) if they were to have turkey on Thanksgiving. Obviously, the hunting and killing of a wild animal is traditionally the job of the man… the hunter/gatherer and whatnot.

Since we don’t hafta shoot our turkeys anymore, it still gives a man great pride to go to the store and buy a big bird for the family at Thanksgiving, with the money he has earned working his job. Still the same gender role, only a helluva lot easier (turkey hunting is not that easy. believe me, I’ve tried it).

our bird in a bag

The cooking and preparing of the bird, and especially the carving of it, a la Christmas Vacation, is the job of the family patriarch (in our case, I’ve asked my dad to carve our bird tomorrow).

Men, cooking a turkey is not a bad job at all, provided you thaw the sumbitch out properly, unlike Jon Arbuckle. We took our turkey out of the freezer Sunday morning and put it in the fridge to thaw it all slow like, for maximum protection against food poisoning.

Just a quick rant here: the internet wants us to believe that, unless you have purchased a locally farmed bird that was raised in a penthouse with cable tv, then you are a worthless piece of shit and should kill yourself. Well, screw the internet yupsters: this is turkey cooking like all us regular joe shmoes grew up with and will continue doing because we don’t have $100 to spend on the damn turkey.

So yeah, take your turkey out of the freezer a few days before you want to cook it (I’m cooking ours today) and put Turkey Lurkey into his condo in the fridgerator.

Next, put that big bastard on a roasting pan and preheat your oven to tree-fitty. I know this is obvious, but we’re going with the “oven roasted” bird here, not smoked, or fried, or cajun dipped (side note: as someone who grew up around cajun food, adding a little red pepper to your spice mix does NOT make it cajun), or whatever other method is hot this year. If you are cooking a turducken, disregard this message because you just won Thanksgiving. My parents have always smoked their turkey, and it is delicious, but we don’t have a smoker, so there ya go.

Put the bird in the oven, covered with foil and butter (goes between the bird and the foil), and roast it for about 4 hours. Unless you have turkeyzilla, this should be plenty of time. 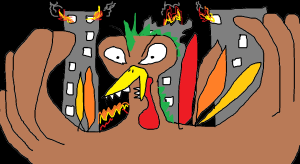 Also, every now and then get that rascal out of there and baste it with something. Most people use butter and spices.

After the 4 hours is done, take it out and let it cool for a while. Like an hour or so. Then summon the Patriarch to carve it up.

To hear people talk about it, you’d think cooking a turkey was something akin to breaking the land-speed record  on a skateboard, but as I have pointed out, there’s really only about 4 steps or so.

2. the Muppets movie that comes out today.

Now, I don’t think it will be as bad as the Smurfs or the Transformers movies (I doubt that is even possible), but I’m not thinking it will be good either. Hopefully not as bad as that holiday special they did a few years back with Whoopi Goldberg. I think the most we can hope for is “Muppet Treasure Island”. As in, nowhere nearly as good as the original trilogy, not quite as good as Muppets in Space or Muppet Christmas Carol, but not as bad as the Whoopi Goldberg thing (which I went to the Muppets wiki and found out was called “Letters to Santa”).

The Muppets are sorta like the Star Wars movies (and nevermind that Yoda is a Muppet, or that he was “done” by Frank Oz): the original trilogy is gold, but unlike Star Wars, at least the subsequent movies are watchable. As in, I will admit that they exist.

We are scheduled to go see it tomorrow night with some friends with whom I have been going to see movies on Thanksgiving night for at least ten years now. We’re all very excited, but nervous.

I saw a trailer where a chicken chorus sings that C-lo Green song “fuck you”. That is bad. And it does not bode well for the “goodness” of this movie. What happened to the Muppet movies having ORIGINAL music? Some of the greatest movie tunes ever came from Muppet movies: Rainbow Connection, Movin Right Along, and pretty much the entire Muppet Christmas Carol soundtrack. Feel like having a good cry? Put on Muppets Take Manhattan and see if you can make it through this:

If you make it through the Fozzie part with both eyes dry, then you have no soul and are doomed. Perhaps you sold it for a donut (a Krispy Kreme may be worth it, so I don’t blame you).

3. My Workout Today at the JFZ

Ok, fun is over for today. I saved this for last because it’s only interesting to me and anyone else who may be curious as to how long I will continue fitnessing before giving up (no retreat, no surrender).

I hit two, count em TWO, all-time personal weight lifting records today!!! Not only did I lift more on the ToT today than I ever have before, but I did it 10 times!!! I won’t say how much weight I hoisted into the air, but I will say this: when I sat it down it made a good solid “clunk” sound, as opposed to a “clatter”. Feels good, man. Tomorrow I will be stove up, that is for sure. Probably not plum stove up, though.

I did my normal routine on the Whirl Bird today: 25 minutes at 40% difficulty. This is also quite an accomplishment (that this is my “norm” now) because when I started, I could only do 30 minutes at 0% difficulty before I thought I might yack.

“Eye of the Tiger” came on my ipod today, which always makes the workout better. I always must fight the temptation to put that song on repeat, but I know that, like all things, it would eventually lose its impact.

Epilogue: I’m guessing Jonathon Cabot will be here in this space tomorrow. Not sure yet. Check back and see and whatnot. During the holidays, all bets are off. Hope you have a good Turkey Day and give thanks that you are not a fat turd like me who must blog about exercise in order to keep doing it.

This entry was posted in About Fitness, About Me, About Media, General dorky shit, Uncategorized. Bookmark the permalink.

6 Responses to Cooking Turkey Lurkey and other small things…