And before we get on to finishing up our look at Haunted Mansion records, I need to do more confessing…

I haven’t been to the JFZ since Wednesday of last week. Today is Monday, in case you’re like me and have been in a drunken stupor the last 4 days. Here’s the excuses…

1. Thursday I slept most of the day after being up all night Wednesday night. Thursday night was a Shonen Knife show that I attended and, while I didn’t get completely smashed out of my pumpkin, I was up till 4am…

2. Which leads to Friday and sleeping all day and feeling like crap.

3. Saturday I had to work and then spent the rest of the day decorating and getting ready for the party. Then I had our annual Halloween party and got completely blind stinking drunk.

5. Today is Halloween and I’m still feeling the effects of Saturday night. Plus I hafta spend today cleaning up from Saturday night and watching movies and playing video games.

Tomorrow will see a return to form as I plan to wake up at 5am and get back to the JFZ and the smiley girl at the desk, who probably will wonder why I’ve been such a slacker. So I really only skipped two days, because I never go to the JFZ on Thursdays or the weekend anyway. No big deal, but we can’t have it turn into a big deal, which will mean whoopin that Whirly Bird’s ass tomorrow, lest he get too comfortable and smug.

With all that said…

I wish you all nothing but the best on this scariest day of the year, when the veil between light and dark is at its thinnest, and the dead are closer than ever!

A friend of mine shared this with me one year, so now I’ll share it with you:

How could anyone not love the Onion?

I can’t believe that Halloween is already here! I had so much that I wanted to get to, but never did! I guess those things will hafta be saved for next year. Which is good, in a way, because I can kinda have a tendency to blow my wad.

Today’s post is going to deal with, obviously, the last two Haunted Mansion records that I own. The first one being this:

I honestly don’t know much about this record, other than that it was released as a “sequel” to the original “Chilling, Thrilling, Sounds of the Haunted House”. Unlike the original (the white cover one we talked about a couple posts ago), this one doesn’t have a story with it. It is just sound effects. And to be honest, not very good ones at that. I think all critics would agree with me that this one doesn’t really hold a candle to the original, although I have heard many say that this one is actually scarier than the original. I also don’t like the cover art for this one as much as the original, so that makes this one all-around a sub-par release in the Disney “Haunted Mansion”-related records. Recommended only for doofuses like me who want to “collect em all!”

The next one is this one:

The A Side of this record contains the audio from the “Trick or Treat” short that we watched a few posts back. You can probably guess that from the cover. It also included 2 masks, which I don’t have and they didn’t come with the record when I got it offa the ebay. I actually got this record for extremely cheap because I bought it in a lot with the Mary Poppins record and Winnie the Pooh. Normally, this record will go for around $10 on ebay by itself, but I think it slid under Haunted Mansion collectors’ noses because it was just grouped in with the other records. I think I got them all for under $5.

The B Side is an abbreviated version of the Haunted Mansion record we looked at in the last post, the one with the book attached. It includes a short version of the story, followed by “Grim Grinning Ghosts”. 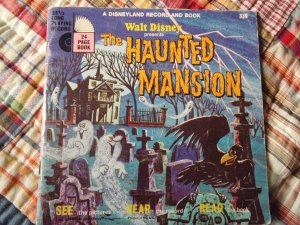 Once again, we get the raven on the cover, who is, of course, the narrator of this story.

“Have you ever been in a Haunted Mansion?”

You may notice that the look of this Haunted Mansion is more like from the cover of the original “Chilling Thrilling Sounds” record than like the actual Haunted Mansion ride. This record was released in 1970 (41 years ago! lawd.), after the ride had been opened in 1969 in Disneyland, so I have no clue as to why they didn’t make the Mansion in this book resemble either of the Haunted Mansions that were in operation in the parks. But, therein could be the reason: perhaps they didn’t want to alienate anyone by making either the East Coast Mansion or the West Coast Mansion appear as though it were the “official” Haunted Mansion of Disney. It also could have been that they just wanted to keep the Mansion looking the same to preserve the records’ continuity and theme.

Either way, I like the look of this Mansion here. And the smiling ghosts let you know that this story may be a bit spooky, but it wont be just downright pants-wetting scary.

a good look at the Mansion, some grinning ghosts, and the Raven

I really love this artist’s rendering of the Stretching Room. I love the original paintings by Marc Davis. In fact, I love them so much that I have reproductions framed and hanging in my living room year-round! I know, I am stupid. 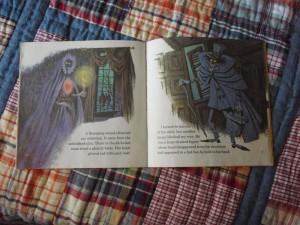 the Bride and the Hatbox Ghost

Here are two items that are no longer in the Mansion ride: the original “beating heart” bride, and the Hatbox Ghost we mentioned before. And also the Raven narrator! One of the reasons all this early Mansion collectible stuff is so valuable is because it all features characters like the Hatbox Ghost who no longer even exist! So it gives HM fans a kind of window into the past of what the Mansion was like originally, and how it was originally presented to the public, as designed by Walt, Rolly Crump, Marc Davis, Harper Goff, and a host of other Disney legends, artists, and assorted geniuses.

So, I hope you all have a great Halloween! Watch something scary, allow yourself to be scared by it, then hide under the covers and eat a piece of candy! but not too much, this is still FITfordragoncon, after all!

Tomorrow we’ll meet back here at the rendezvous point and move towards the holiday season and, as always, one day closer to Dragon*Con and our fitness goals.