It was probably a few weeks ago now. I was adrift in a sea of potential Halloween costumes, not knowing where I was headed. Usually, such an important decision would have been made months, if not years, prior to the season.

Granted, I’m not known for my elaborate Halloween costumes. As one of the official hosts of the area’s best Halloween soiree, my job is to throw the party. Let others worry about such inconsequential matters as “costumes”, right? My job is done when people show up and have a good time.

My costumes usually consist of a grim reaper robe and a half-mask, in accordance with my number one rule of cosplaying: Just Make Sure You Can Easily Drink.

Despite this, a few weeks ago I was reading one of my favorite blogs to ever exist: Dinosaur Dracula (a link to which you will find in my blogroll to the right).

Actually, to save you a little time, allow me to just link directly to the post in question.

As soon as I saw this post, and saw this video…….

…I knew it was destiny.

After a little prodding/encouragement from Matt (Double D himself) via Twitter, I knew my fate was sealed. And rule number one was thrown promptly out the window.

If you’ve read this blog, even a little bit, you know that I don’t know how to make shit.

Therefore, rather than learn how to make things, it was up to me to collect the items necessary to transform myself into GORZAK (GORZAK insists on all caps).

The main problem is that GORZAK is not just any black werewolf. He is some sort of barbarian-demon-alien-werewolf hybrid, for maximum fear and intimidation.

Plus he is a giant.

Being bigger than most of my friends (hence the slight attempt-to-fitness angle to this blog), this was not the problem.

The problem is that wonky armor he has on. What the hell is that? It looks almost biological. Tubes and shit.

I briefly entertained the thought of going to Home Depot and buying a bunch of black hoses.

That seemed like too much trouble, and so I decided to start with the basics:

This is a gorilla costume. Size Deluxe.

A gorilla suit is like a tux, in that every person should own one, so that you’re prepared when the situation arises.

My cousin always says that a party isn’t complete until someone shows up in a gorilla costume, so I bought one in case I ever needed to take one for the team.

Also, in case you’re wondering, I am going with a black werewolf style, instead of brown, because I figure I’m the Real GORZAK. Much like the Real Ghostbusters, the Real GORZAK is the toy, the cartoon in the commercial is just an artist’s rendering. Coming from the town that gave the world the Crichton Leprechaun, I feel like I deserve a little leeway. No matter what I come up with, if it has a snout and fur, I’ll be closer to GORZAK than the artist who reinterpreted the leprechaun.

As you can see in the video, GORZAK is not a monkey. So I needed a werewolf mask. 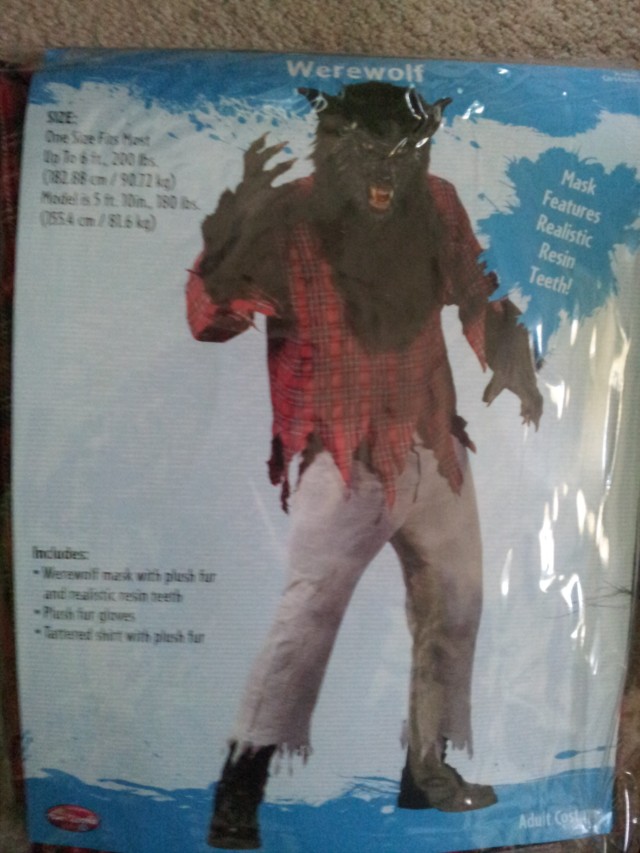 It was only a quick amazon search for “black werewolf” before I found this. A good costume, in and of itself, but I needed full-body fur. Not just gloves. GORZAK hasn’t ever done an honest day’s work in his life, nor do I truly believe he was ever human, so the ripped-up leatherneck garb is completely unsuitable.

This left 3 things: the weirdo alien armor, shackles, and an axe. As though being a giant werewolf were not enough. Where did GORZAK find an axe big enough for him?

Also, when he breaks out of the good guy’s castle(?) he has A GIANT AXE. Did they not take his weapon when they locked him up? Not to mention how these pitiful human insects got a gnarly creature like GORZAK locked up in the first place.

The commercial leaves a lot to the imagination and conjecture. As DD said, GORZAK has no frame of reference. As in, he’s not from a show or anything. But, does he really need to be? GORZAK is seriously enough for me, in and of himself.

Don’t go changing, to try and please me, GORZAK. 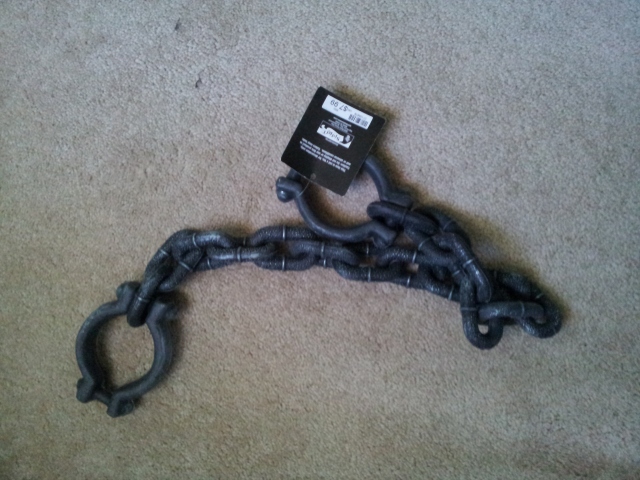 Got these from the local Spirit store. All I need to do is cut them apart in the middle because, unlike GORZAK, I am not strong enough just to bust them with insane wrist strength.

I found this on amazon also. I like that it is collapsible, because you can’t really tell in the clip if the axe is a long-handled executioner-style axe, or a hand axe.

Once you see my “armor”, you’ll wonder why I worried about axe accuracy at all. My attitude was that the armor may look like a doodie, but if everything else was close enough, that was good enough for me.

This is the “armor” It’s a “Spartan Chest Plate” that I got at Party City for like $10. It is seriously flimsy. Although if I’m fighting tiny humans, it could probably stop a tiny bullet or tank shell.

The two shoulder spikes, which I thought were essential to distinguish GORZAK armor from just your everyday Roman or Spartan bullmess, came from a child’s “Rotten Rocker” costume, which is a zombie member of KISS.

Is this close enough? It’s more or less the same color, has spikes, and was cheap and I didn’t have to make anything. Yes, it is close enough. Plus, for some reason, fake muscles are molded into the armor. Look out, ladies! This will definitely fool them into thinking I am ripped.

As I said in a tweeter, “with these items combined…

… I AM GORZAK!!!!!”
(Press play on the video above, it’s a remake of the TYCO commercial starring me as a slightly more realistic vision of how Toy GORZAK operated) 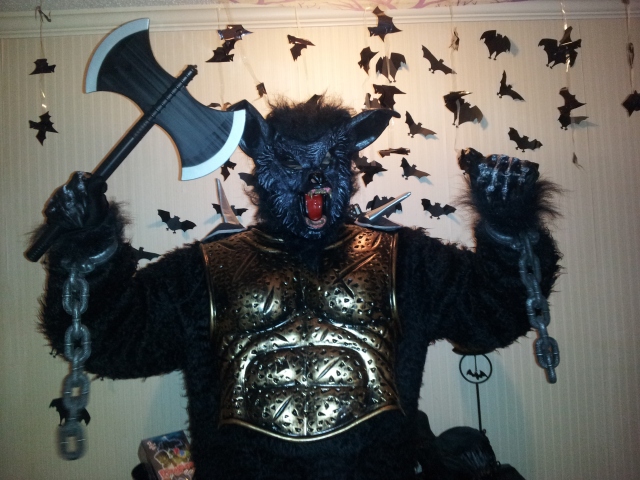 And yes, at around 00:09 in the video, I break the shit out of my axe. Happy Halloween!

11 Responses to I AM GORZAK