Posted on September 12, 2012 by bayoubabylon

Before I go full-bore into Halloween, I have a couple Dragon*Con announcements, which you can also find on the official Dragon*Con site. But since I know that there is at least one person who comes here and never goes to dragoncon.org, I will write them anyway.

1. You only have two more days to purchase your 2013 D*C membership for the dirt cheap price of $65 for the whole weekend. After that, it goes up to the still-low price of $75. This makes fiscal sense if you’re planning to go, or if you’re like me and have just become aware that you have roped yourself into going by having a blog that is somewhat centered around Dragon*Con. As in, it’s right in the flippin title.

2. The Hilton is already sold out for next year. Unbelievable. The Marriott opens up reservations at 0900EST on October 10th. I plan on being in front of my computer and on the phone at 0759 local time. If you remember from last year, the Marriott sold out their Dragon*Con rooms very quickly, so good luck to everyone, including me.

With that out of the way,

That is much closer than Dragon*Con. And they are very similar. It’s a chance for all you badass cosplayers out there to show up at your local bar and win a costume contest (or come to my party and win a killer trophy. your choice). There’s nothing quite like showing up to your local watering hole’s costume contest in your homemade Lefty Frizzell costume, only to discover an 8-foot-tall, fully operational, Iron Man cosplayer. Time to drown your sorrows, Lefty. That teetotalling cosplayer, who only shows up at the bar once a year to ruin your night, will be taking home your precious ribbon tonight.

Am I jumping the gun on Halloween? Like Cracker Barrel when they put out their Christmas stuff in August?

No. And there are two reasons why I feel this way. Plus I love a good old-fashioned two item list.

1. Dinosaur fucking Dracula. For several years now, this guy, Dinosaur Dracula, has been dictating to me when the Halloween season begins. Not the stupid calendar. The calendar doesn’t know shit. Am I saying that Dinosaur Dracula is smarter than a calendar? Possibly even more astute than time itself??? Well, put it this way, if it’s a Far Side wall calendar, yes. If it’s a Far Side desk calendar, with a new joke every day, no.

Regardless, I know I am not alone in feeling that the Dino Drac has jumpstarted my Halloween, whether I was ready or not.

2. Cooler weather! It actually got into the 60’s the other night! That is a miracle for down here. Anything below a thousand degrees before October is like finding an extra pack of gum in your stocking after you thought it was already empty. And yes, that is a Christmas reference, just to keep all you “He’s jumping the gun!” people in check as to how far I am actually willing to leap over that gun.

Is this an Indian Fall? Is that an offensive term? I don’t know. But I know that when I was in college and it would get into the 60’s, all the people who had been dying to bust out their fall/winter wardrobe would come out at night in scarves and sweaters, sweating it up for the sake of fashion. Unfortunately, it was (and is) still perfectly comfortable to wear shorts and flippity flops. It’s just that. Comfortable. Not mind-numbing, soul-burning, infernus ad infernum.

So Damn the Torpedoes, full speed ahead!

If you haven’t been here in awhile, you will notice my new Halloween-y look! I put the same pic that is my background here as the “cover photo” for the ffdc facebook page. I offered prizes for a correct guess at what it is from, but had no takers. Therefore I say again: anyone who knows what this screenshot is from, gets a prize! Here’s a hint: it’s from the intro to a movie.

There is a lot to like about Halloween. For one thing, on a personal note, I can get the wife to watch horror movies with me. Real ones, not “Full Moon High” or “Saturday the 14th”.

Also, bloggers everywhere come out of hibernation and go completely batshit crazy, which means that some of my favorite blogs get really active.

But really, one of my favorite things about Halloween is that once a year, for a little over a month or so, everyone is either into horror/macabre-related stuff, or even better: they are having it shoved in their face whether they like it or not.

I just really like going into my local store and seeing these normal, everyday joes trying to decide between a ladle shaped like a skeleton hand, or one shaped like a skull. Or talking excitedly about whether they want to be a wizard or a pirate for Halloween.

But what is even better, for me, is seeing the people who openly dislike Halloween having to walk around their local Target with a look of distaste on their face. Everything that is normal, to them, is suddenly covered with bones, blood, and orange and black. It is a wonderful feeling to see the people who are normally in charge around here (fundamentalist rednecks) be forced to take a backseat for a month while darkness, horror, and my own brand of nihilism take the wheel.

With that in mind, I’d like to show you a couple of my recent scores that, I feel, reflect this:

Here is a photo of my hand in my new skeleton oven mitt! For a fella who occasionally enjoys cooking, this oven mitt makes everything I cook totally heavy metal (“Who’s for heavy metal quiches?!?!?!?!”). As a bonus, it looks like the Misfits gloves, but it’s an oven mitt, so I can picture Danzig cooking up some pumpkin and bat-shaped cookies for the band.

These mitts were on display at my local World Market, and I literally saw a woman with the “Fundy Bob” hairdo walk by them and give them a snarling look of hate and disgust. Sold!!!! 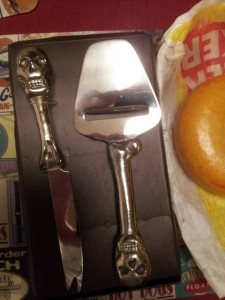 This is a spooky cheese tool set, accompanied by some hard cheese my wife brought home from Scandinavia. Totally something, like the oven glove, that I will use all year… but only on special occasions. I mean, normally my Halloween gear consists of plastic cups with bones drawn on them and paper pumpkin lanterns. These are silver! Or at least some sort of silver-finished metal.

I know that it being acceptable for adults to be into Halloween is a fairly recent phenomenon, but I am thankful for whatever cultural shift caused this whole thing to happen. Like the explosion of geek culture, I think it mostly can be traced to our growing culture of acceptance, and thus hedonism. If it feels good, and is fun, it’s ok to do it. And if there’s one thing that the year-round Halloween aficionado enjoys, it is blatant hedonism.

Enjoy the season, stick around ffdc for spooky fun, and visit my links for even more fun!

What is ffdc up to? For all 5 of you who read this, stay tuned until tomorrow!!!! 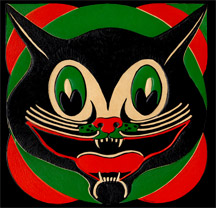 This entry was posted in About Dragon*Con, About Me, General dorky shit and tagged halloween, kitchen utensils. Bookmark the permalink.