Posted on November 3, 2011 by bayoubabylon

Before we go any further, you need to read THIS ARTICLE about Fitocracy.

Not only do I like Fitocracy, but I’m also a member. In fact, here’s a link to my profile on there. You’ll notice that I am only a level 6 Fitocrat, barely a scrub in the world of Online Fitnessing Adventure. This is because I haven’t been doing Fitocracy for very long, and also because half the time I forget to log my workouts, and you can only go back a few days to log past workouts (I completely forgot to log anything last week).

I am also a member of the group “Dragon*Con”. A group on fitocracy could be compared to a Guild or Kinship in an MMO game.

I received an invitation from someone on the FFDC facebook page, and immediately joined when I realized that it put fitness into terms I could understand (“quests”, “leveling up”, etc.). Until I read this article on CNN.com, I had no clue that it was actually started by two gamer types, such as myself.

I knew that I wasn’t the first “fitness for geeks” blog out there, I figured with the absolute media blitzkrieg of “geek mania” lately, that someone had to have done it already. But I didn’t figure on Fitocracy which, to me, is pure internet genius. 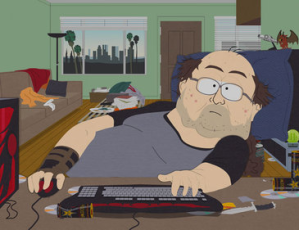 Check out this guy (pic stolen shamelessly from the internet, who stole it from the South Park episode, “Make Love, Not Warcraft” which is about WoW and is a brilliant episode, imo). This is your average, stereotypical gamer.

This stereotype exists for a reason. It gets into it a bit in the article, but the reason this stereotype exists is because, believe it or not, it is more fun to play video games than go to the JFZ. The article gets into some stuff that, generally, I don’t agree with (the typical “videogames are like a drug” bullshit), but it does key in on one point: that the gaming personality is actually well-suited for setting fitness goals and then working towards achieving them, it just has to be on the gamer’s terms and presented to him/her in a way that they can dissect and figure out.

See, exercise and fitness are not things that the gamer normally can understand. If you were to break down nerd/geek culture into stereotypes, in many ways it would be the Gamer class that I most identify with. Ever since Atari came out and I got my first Nintendo (my folks got me an 8-bit NES set with the gun and with Mike Tyson’s Punchout and Contra. One of the best Christmases ever), I have thoroughly enjoyed video games. But not just video games, I also have always enjoyed all types of games, from D&D, to Warhammer, to board games, I’ve played them all and enjoyed every minute of it.

Anyway, gamers like me have always had a hard time understanding the lions/gym rats out there in the world. My dad once said, “The first time I see a jogger smiling, that’s when I’ll take it up”, and this kinda sums up the gamer’s attitude (by the way, while never taking up jogging, my dad now walks several miles a day). Playing Contra is fun, and physical labor is definitely not fun. Plus, it takes a lot of dedication to be good at a MMO, which leaves precious little time for anything else (like boring things like family, work, school, fitnessing, etc.).

And there’s just not a lot of motivation for the gamer to get fit. A hardcore gamer, like the fella shown in the picture above, is not interested in getting laid, not when there’s epic gear to be had! The hardcore gamer doesn’t give a crap about eating right, who’s got time to prepare a balanced meal during a raid???

The point of all this rambling is that geeks/nerds/gamers/whatthefuckever need motivation. For the most part, other gamers are all with them online, and a good raiding guild can be very demanding of a person’s time (I would explain what a “raiding guild” is, but I honestly can’t wait to log on to Warhammer Online, hahahaha. Irony.).

The point of Fitocracy is the same point of FFDC: to get us all out from behind our computers and up on our feet, with celery in our mouth instead of lying cake. The stereotype exists, but that does not mean that we hafta live up to it (I know I harp on this subject all the time, but my bad). There’s a lot of pressure in the world for us to live up to stereotypes. Not just nerds/geeks (though nowadays there is more pressure than ever to do just that), but everyone. I live in the South, the absolute Deepest part of it as a matter of fact, and you would not believe the pressure down here to live up to the stereotype of the typical Southern Man (picture Joe the Cable Guy, or whatever that poser motherfucker’s name is). But why would I want to pretend that I give a shit about something that I couldn’t care less about, when on Fitocracy (and hopefully, here too) I can meet up with other people who are not ashamed that they like Fantasy more than Football, or BSG more than working on cars? There’s no point in that, whatsoever. Plus, I can admit that I like video games, but have also developed and cultivated a keen interest in getting fit as shit so that I can wear a badass costume for Dragon*Con 2012.

I promise that, out of the lions who prowl the savanna of the JFZ daily, there are some who would rather be discussing Tolkien than discussing whether Alabama is going to beat LSU this weekend (and believe me, these dumbass lions have been growling about nothing else for the past month).

I know this post was very rambly, but I haven’t had much sleep and I really wanted to sing the praises of Fitocracy, a website who is part of our brethren and who is doing more for my cause than I can ever hope to.