I know I haven’t talked much about fitnessing lately. Rest assured, that as long as I’m posting on this blog that I am keeping up with my exercisms. Even when I’m not posting I’m keeping up with them. Like yesterday.

Yesterday and today I followed my friend’s advice and did weight-lifting first, and then cardio. It works out ok, except  that the Whirly Bird is upstairs, which means I hafta walk up the stairs to get to it, and a lot of times after hitting the Trilogy of Terror, I just don’t feel like it. (((as a side note, someone asked me the other day what the Trilogy of Terror was, exactly. If you’ll click on the “about fitfordragoncon” tab, there is a glossary included for your convenience)))

Let me rephrase that. After hitting the ToT, I often feel like I may faint, or yack, or both. This means I don’t feel like walking up the steps to the Whirly Bird’s hangar.

For food, I’ve been eating more beef because I need some protein. Yesterday for lunch I had a steak (which I cooked in the pan. it turned out ok, but not great) and some eggs. A couple nights ago, me and the wife went out and I got a steak, some grilled veggies, and some steamed broccoli. Steamed broccoli makes me fart like the dog in Soggy Bottom USA. I blew the covers off the bed that night.

Fall weather is moving in finally. Today on the way to the JFZ I turned on the heater! Goodbye stupid Summer!!! I hate you and don’t ever come back!!!!

This is the official “Surf II Watchalong”. Why do I call it a “watchalong”? Because I have never seen this movie before, so we’re gonna watch it together.

Someone uploaded it to youtube, so I’m gonna go ahead and post this post with “Part 1” already on it. Then, I watch it and come back and post my thoughts on Part 1 and also post Part 2, and so on and so forth.

I have never seen Surf II, but from what I’ve heard, it’s NSFW as a mothereffer, so you might not wanna get caught watching it.

A friend of mine recommended it after I posted about Bikini Car Wash Company, if that gives you any idea. He claims that it’s like that movie, except it’s a horror-comedy. I think he mentioned Eric Stoltz, zombies, and something about people drinking motor oil. And, of course, T&A.

From what I can tell, there is no Surf I or Surf III, which places this next to Leonard Part 6, as one of the flicks where someone thought it would be real funny to have a sequel to a movie that never existed in the first place. I hafta admit, it is kinda funny.

I also have never seen Surf II referred to as “Surf 2”, which makes me think that the “II” may hold some significance as the movie drags on and on and on…

Ok, so apparently its subtitle is “the End of the Trilogy” so clearly the title of “Surf II” is meant for comedic effect. 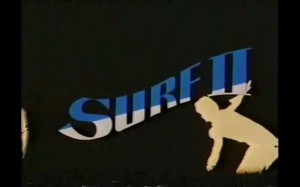 After watching Part 1, we can tell a few things already:

First, there’s not going to be as much T&A as I thought there would be. The chick at the end of Part 1 who is under an outdoor shower, I assume, would definitely have been completely neckid if this was Bikini Car Wash Company. Bikini Car Wash Company would have shown about 30 sets of boobies by now, whereas I have counted 4 so far. And highly pixelated ones at that. Those girls should be ashamed.

Second, the humor seems to be of the “Naked Gun” variety. “Chief Boyardee”??? Ha!

Third, Buzz cola could eventually turn into some kind of political/ social statement about materialism and our addiction to drink/eat whatever we are told to. If this is the case, I’m hoping it takes a backseat to the humor, zombies, motor oil consuming, etc. And whatever that alien thing was at the beginning that ate those surfers (“Bummer!”). Good to see a young Eric Stoltz before he got too serious and shit. 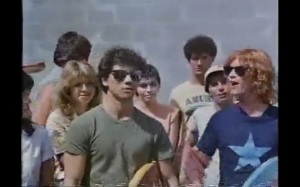 Gay humor. Great. “Didn’t I remind you to put the gay magazines next to the fruit juices???” Insinuating that drinking juice is for the gay folk. Or that if you drink fruit juice, you must be gay. Either way, I’m not surprised, since this kind of humor was everywhere in early 80’s comedies (including Monster Squad).

So I guess the three “punk rockers” who show up at the arcade are the three surfers who got jacked at the beginning. Did teenagers ever hang out in the arcade? I mean real teenagers, 16-18 year-olds like these guys are supposed to be, not 13-15 year olds who are dropped off there by their parents and don’t really have a choice. If this is true, being a teen in the early 80’s must have been totally radical cowabunga.

Once again, as in a lot of late 70’s and early 80’s comedies, the “nerd” is the bad guy. I’m almost positive that the nerd in this is the same guy who played Eugene in Grease. This guy must have made a decent living playing nerds in like every high school movie from about 1975 until 2008.

I never knew that nerds hated surfers, but you learn something new every day. I don’t feel compelled to hate surfers though because I identify with both ethnic groups.

Also, I have a feeling that Buzz cola is up to no good…

Finally, more boobs! But they are immediately cancelled out by a fat guy’s butthole. Why do us wildebeests always gotta be stupid and the butt of every joke? (heh heh heh)

Hanging at the public beach is a total bummer…

Until you can get some booze and hang out with hot chicks and brag about how you kicked some geek’s ass.

Then your girlfriends (?) show up and almost get you killed and/or put in prison by wrongfully accusing you of being a murderer. The cops, thankfully, are suitably moronic.

So we learn that Eugene was once a surfer himself. I’m guessing that he was the geek that got “pounded” by Eric Stoltz’s co-star. Now he wants revenge.

His girlfriend is also, naturally, a homely nerd herself, but he puts her in a suitcase or something to keep her hot.

We also finally get some motor oil drinking. “40 WEIGHT!” I wonder what that is that the actor is really drinking. Looks like mud. It’s probably some kind of chocolate milkshake.

So their friend who drank the Buzz has now completed his change to punk rocker. We know this because now he’s only interested in trashing his bedroom and listening to the Circle Jerks. Apparently, according to whomever wrote this movie, “punk rockers” are the opposite of surfers. I’ve always thought they were kind of related, but I was obviously wrong. I guess Eugene thinks that if he turns everyone into punk rockers that they’ll be more interested in going to shows and drinking cheap beer than surfing, leaving him to win the upcoming surf contest. That’s my guess, anyway.

He’s also moved on to antifreeze, away from the motor oil.

Watching a movie in a movie is always a good way to fill out some time. Eugene shows up to the surf flick with his girlfriend looking like David Bowie and the the guys pull the old “flaming bag of shit” trick on him, inside the theatre! I’ve been known to get up to some hijinks in the cinema, but I don’t think I’ve ever lit anything on fire. Much less a paper bag full of feces.

David Bowie tries to warn the guys, and punk rockers eat the film. These are some weird zombies, it seems like they’re not even interested in eating brains!

Buzz Cola must be gaining in popularity, because Eugene takes his ol lady to a restaurant staffed entirely by his punk rocker creations!!!

I love movies that show fat guys as having superhuman strength. It means I can sometimes intimidate Hardbodies who have seen lots of movies from the 80’s.

This segment features the beach party that they’ve been hyping up. You can’t argue with girls shaking their boobs and butts to a ska band. Well, I guess you can, but I won’t.

The fat guy has an eating contest with the head zombie, whose name I think is “Yakko”. A human, no matter how fat he is, just does not stand a chance in an eat-off with a zombie punk rocker. Regardless of all that, this is the obligatory “gross out” scene.

The very last frame shows that submarine back. That thing totally looks like the eye of that creature in the junkwater room onboard the Death Star in Star Wars.

At long last, the zombies attack humans after a newly-minted one bites a cop’s foot! Those new zombies are always the meanest. They got something to prove.

Eugene’s turncoat girlfriend helps the guys escape and they capture a zombie and take it to their science teacher’s house, where he dissects it and discovers something that we suspected all along: that the zombies are robots. Of course they would be, since the mastermind behind this scheme was Eugene the Nerd, taking one straight out of the Scooby Doo playbook. Nerds love robots, and they also know how to build them.

Also, the zombies aren’t eating the party guests, they’re capturing them and taking them aboard Eugene’s subaquatic travel and zombie-making device.

“DUDE! This must be the formula for Buzzz Cola!””

Speaking of stealing from playbooks, here’s one from Slaughter High: cool kids play a cruel practical joke on a nerd and now he’s out for revenge! (RIP Simon Scuddamore)

Apparently the zombie robots were created with the ability to surf and they’ve entered the contest! Hopefully the guys can outsmart them and keep them busy while David Bowie and Stephen King overthrow Eugene’s empire.

Plenty of surf footage in this segment. Yet another way to pad some time.

The guys win the contest, but are immediately kidnapped and taken aboard Eugene’s submarine.

Of course, things go awry and everyone escapes and ends up soaking wet on the beach, a la the Goonies.

Not much in this one that begs to be discussed…

Somehow Eugene ends up not being killed or arrested and actually ends up hanging with the guys on the beach, with a great hat! The dads, who were Eugene’s partners, are punished to dress up like women for the rest of their lives (“can you relate?”). Then two wildebeests chase them down the beach, hoping for a piece of hairy ass.

To sum it up, there wasn’t as much “horror” or T&A as I expected, but since we’ve come this far, I’m definitely not backing out now.

I doubt there is one person who actually watched this with me, keeping up with the updates and new content, but so be it. At least you get to read about my journey on a Wednesday morning through the bizarre world of a “beach surf killer robot revenge movie”. Or maybe, that’s your punishment for being in league with Buzzzzz. Like MST3K, you are now doomed to read this blog…. bwa ha ha.