Rock’n Halloween Light Displays and Bride of the Monster!!!

Before I started writing anything on today’s blogpost, a friend shared this with me on facebox.

I love Black Sabbath. I’ve never thought about what my “top ten bands of all time” are, but Sabbath would definitely be in there. I’m not one of these guys who hates the post-Ozzy, Dio-version either, but I do tend to enjoy the Ozzy era more, but that may be because I’m just more familiar with those songs and consider them to be the quintessential Black Sabbath songs.

I also like the band “Ozzy Osbourne”, and not just because I like bands that are just the name of the honcho. I actually like “Bark at the Moon” as an album. I’m not kidding.

With that in mind, watch this shizzzz…

Someone has a ton of time on their hands and they have used it magnificently!!! If I was not as lazy as I am, and had a ton of time and money, I would probably not do something like this, but I am infinitely glad that someone else has done it.

I also like that it is called “Rock’n”. It’s like “Cap’n”. Cap’n Crunch should come out with some weird variant called “Rock’n Cap’n Crunch’n”. Or maybe there could be a snack called “Rock’n’Crunch’n’Munch’n”. The “rock’n” version of “Cap’n Crunch” would probably just be regular ol’ mouth-shreddin’ Cap’n Crunch with a bunch of oddly-hued crunchberries added for that certain “rock’n” not-so-special effects. However, I am frightened by the prospect of “Rock’n’Crunch’n’Munch’n”. Regular “Crunch’n Munch” is like eating rocks already, albeit sweet ones from the big rock candy mountain. To make “CnM” MO’ ROCK’N would no doubt involve adding some extra amounts of granite to the mixture, producing an effect not unlike dynamite on your dentures. “Is that ROCK’N enough for ya???” Maybe.

I was going to post today about how awesome my workout at the JFZ was today, and I still might get to that eventually, but once I watched this “Rock’n” Halloween light display, youtube, courteous motherfuckers that they are, suggested that I watch other Halloween yard-light-displays-synchronized-to-music. You mean to tell me that there are more than one person out there in this world who do this sort of thing? I mean, these guys are the antithesis of me. I have always identified with Clark Griswold, meaning that if I were to try something like this I would fail miserably (unlike Clark, I would not retain my holiday cheer through it all, I would flip my shit and burn my house down). These guys must identify with famous overachievers like ummm… Napolean.

These are the one-uppers. The guys who, when you tell the story about how your pecker flopped out at Thanksgiving one year, they have a story where their butt fell out and took a dump on the turkey.

But I tell ya, God bless the spirit of yard decoration competition. I have never felt any pressure to compete with my neighbors for best-look’n, or most-decorated lawn (much to their chagrin I can tell you), but I am glad that people do, because it leads to badass’n synchronized light displays. If Ayn Rand were alive, she would love this shit more than fold’n money. I guess I’m more of a populist when it comes to my lawncare.

I honestly doubt that we’ll find one that beats the display displayed above, but this one comes close, for me anyway, just because of the theme and the music it uses.

In case you don’t recognize the tune, it is “Grim, Grinning, Ghosts” which is the theme music from Disney’s Haunted Mansion dark ride, only the best thing ever. And unfortunately, I mean that with all my heart. The Haunted Mansion ride at Disneyland and WDW is my most favoritest thing of all frackin times. I won’t get too far into my borderline-obsession with it, but just know that its total awesomeness nearly puts me into a coma every time I’ve ever ridden it. I haven’t been to WDW in over a year, and I hear they have updated it a bit, so I’m curious, anxious, nervous, and a bit nauseous to try it out with the new stuff.

Apparently, there is at least one other person in this world who likes the Mansion as much as I do and brother, whoever made this light display, I think we may be soulmates, or at least we could be blood brothers. Or penpals.

There is something kinda inherently “Disney-fied” about intricate light displays like this. If you’ve never been to Disneyland or WDW during Halloween-time or the Holidaze, I would highly recommend it. (By the way, I know I am blowing my cool here by admitting that I have thoroughly enjoyed each and every trip I have ever made to WDW or Disneyland, but so be it. If you are shallow enough to judge me on that, then what will you think when I finally reveal something even more dorky? Well, I am trying to think on what that may be, but I don’t think there is anything about me that is dork’n more than being obsessed with a ride at Disney World.)

If you think these displays are brightly lit and gaudy, you haven’t seen anything until you see the “Osborne Lights” at Disney~MGM Studios. I think the Osborne Lights are the grandpappy of all “synchronized light displays” and are probably the spark of inspiration for many amateur electricians to go home and try it out for themselves.

There are several on youtube that are synchronized with the Ghostbusters song, so here’s one of those. Once again, out of some weird sense of obligation to the Ghostbusters…

I probably should have mentioned that you shouldn’t watch that one if you suffer from epilepsy. I think it may be the most “busy” one I have ever seen. It’s like a hundred different things all doing their own thing until it’s time to yell “Ghostbusters!” It’s like getting a bunch of your drunk friends together to do karaoke, but no one knows any of the words to the song except for the chorus… which ends up loud as a mug.

There are also several “how-to” videos on youtube that can give you a basic understanding of how to do this yourself, but thanks to youtube, I don’t have to know, nor do I want to. I’d like to say that it’s because I don’t wanna “ruin the magic” of synchronized yardlight displays, but really it’s just because I am lazy and, as I get older, I feel like the unused real estate in my brain is running out, and I don’t want to risk substituting my OCD knowledge of “perfect squares” with “how to assemble a yardlight display”.

In my opinion, Tim Burton’s best movie may be “Ed Wood”. You rarely see this flick mentioned that much anymore, especially when you’ve got everyone and their brother toking on Nightmare Before Christmas’s stop-motion schlong, but it is a genuinely good movie.

When it came out (1994), I was still in high school and had no clue about movies. I was into horror movies and stuff, but mostly the “big ones” like the Nightmare on Elm Street franchise or Friday the 13th. I knew who Tim Burton was, because this wasn’t long after Nightmare Before Christmas had come out and I loved that movie (even though he didn’t direct it, but you know that).

Ed Wood the movie exposed all of us know-nothings to the irl man Ed Wood, and to his movies and his methods of making movies.

By far, his most famous turkey is “Plan 9 from Outer Space”, which has been a top-contender for “worst movie of all time” since before people started purposefully contending for it. (As a side note, I hate movies that are purposefully bad)

But to me, his best is “Bride of the Monster” starring his usual troupe of jackanapes (Bela Lugosi, Tor Johnson, etc.).

Behind the glare is the dvd.

I got this movie in an Ed Wood boxset (this one, in fact). The box comes with his most famous and “best” movies, and also includes a documentary about Ed Wood called “the Haunted World of Ed Wood”, which points out that Ed Wood led a fairly tragic existence, which is sometimes contrary to the way that Tim Burton painted his life. I hate it that Ed didn’t have a good go during his time on this planet, but hopefully he’s somewhere where he knows that he is way more famous now than he ever was in his lifetime.

“Bride of the Monster” is a good old-fashioned Mad Scientist yarn. Lugosi plays mad scientist “Dr. Eric Vornoff” and Tor Johnson plays his Igor, “Lobo” (a better name for a henchman I have yet to hear).

Dr. Vornoff, like so many mad scientists before him who have failed miserably and spent the remainder of their lives either dead or in an Arkham Asylum franchise somewhere, is out to create a race of “Atomic Supermen”, whom he will use to bring him kleenex during the sad parts of “Beaches”.

Of course, this is a ruse. He is going to use them to take over the world.

An intrepid reporter, a good looking young gal played by Loretta King, is sent to go check out the weird goings-on in the woods, where she is captured by Lobo and brought before the good doctor.

I won’t go any further than that, since I know I have you on the edge of your computer chair. Just watch and find out what happens. There is also a sequel, “Night of the Ghouls”, but it is not as good.

Tim Burton shows Lugosi as being a crotchety old heroin addict with a mouth like a drunken sailor, but I would swear, from this picture alone, that he was a kindly old grandpa who loved making movies and probably dressed up as Santa Claus at Easter for his grandkids. That’s what I’m believing about Dracula, whether anyone tells me otherwise or not.

I’m not gonna do a full breakdown of this movie, because eventually I hafta go to work, but I did want to share a few shots with you, just to tempt you into buying that boxset, or at least giving “Bride of the Monster” a chance.

Obviously a model, which I love. Tim Burton has used this technique quite a bit in his films. I wonder if he got that from Ed Wood? There is no doubt he was influenced by Eddie in some way, otherwise, why would he go to the trouble of making a movie in tribute to him?

Lugosi just plays the mad scientist with such glee, that it is hard to picture him as anything other than being a kindly old gentleman. Tor, as Lobo, just kinda lurks around. I get the feeling that he wasn’t much different than how Tim Burton portrayed him in his movie.

Bride of the Dracula

Lugosi is clearly channeling some Dracula here, as he uses his mind powers to control the captured reporter. I like to think this was Bela’s idea, and not Ed Wood’s.

Bela’s hideout model gets hit by lightning while he’s out stalking around in the woods, carrying the captured girl. 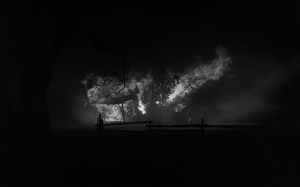 Which means it’s immediately completely engulfed in flames. Since when did the Dr.’s hideout go from being a model haunted house to being a medium-size ranch-style home? 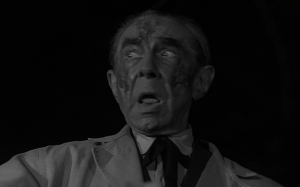 Is dat my hideout on fire??? 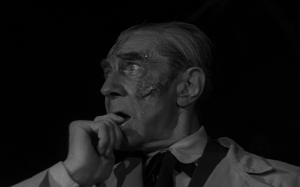 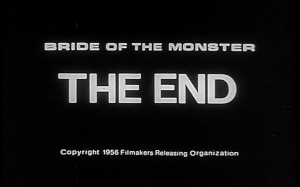 8 Responses to Rock’n Halloween Light Displays and Bride of the Monster!!!