An Hour with the Elliptical Bird & Hell Night

Friends, I thought that being in a traffic jam at 5am was a drag, but today I discovered the Emperor to traffic jam’s Vader….

Talk about derailing a schedule! A flat tire is enough to give even Santa Claus, the jolliest sumbitch on the planet, a case of the Mondays.

So rather than driving half-asleep to the JFZ at 5am, I was changing a tire. I don’t know how many of you fellow sweaty nerdlingers have ever changed a tire, but it’s not as easy as Ralpie’s dad makes it look.

I put the spare tire on, which was half-flat itself, and drove up to the gas station to put some air in it. Then I went to my local tire repair shoppe (whom gives you free tire repair if you buy your tires there. Thanx Trax Tire Co.!)

Waiting for my tire to be repaired took about an hour. At this point, it would have been really easy to just call the day a wash and go home and play LOTRO until time to go to work. In the past, anything that throws me off my schedule has been enough of an excuse to just go to coffee and resume bidness as usual on the next bidness day.

This is one of those hurdles we’ve talked about in the past.

Instead of succumbing to this temptation, I imagined that the Whirly Bird was responsible for my flat tire. The Whirly Bird snuck out of the JFZ last night, came to my house, and slashed my tire because he knows that on Mondays I’m gonna give him unholy hell. How do I know it was him, and not the Trilogy of Terror conspiring against me? The Trilogy are confident in their abilities to defeat me mano-a-machino, and therefore do not need to sneak around and try to prevent me from arriving at the JFZ. The Trilogy just says, “Bring it, tubby.” The Whirly Bird is sneaky. He’s probably Neutral Evil.

With that in mind, after my tire was fixed, I came home and changed into my workout duds and drove up to the JFZ to, once again, confront my nemesis.

Immediately, it felt weird. I was at a disadvantage with my opponent. The Whirly Bird always has home field advantage, but this time he had another advantage: an unfamiliar environment.

The 8:30am JFZ Vibe is very different from the 5:15am JFZ vibe. I was off-balance as soon as I got out of the car. Walking into the JFZ in the glaring light of day just did not feel right.

Behind the counter, there were a lot of JFZ employees that I didn’t recognize. They looked at me with disdain, thinking I was some Johnny-come-lately, one-and-done kind of fat guy. It was the look that they give all the newcomers after New Year’s.

It didn’t matter. I’m not at the JFZ to be J-ed by dufus employees who probably work out to Beyonce or something. My usual girl was also there anyway, all smiles and surprised to see me coming in so late.

On the plus side of things, one of my old school JFZ Cast Members was working out! Joan Jett!!!! JJ is a woman I useta see every day when I first got my JFZ membership a couple years ago. I call her Joan Jett because I think she’s been fitnessing since the 80s. I’ll leave it at that.

I mounted the stairs and approached the Whirly Bird…

I communicated with it via telepathy.

“Surprised to see me, Whirly Bird???”

“Cut the crap, Bird. I know it was you. You broke my heart.”

“You are sentenced to ONE HOUR of fitnessing with me! My fat ass will jar your little inside parts a-loose!!! Bwa ha ha!!!”

I wanted to do the Whirly Bird for an hour. Not just to punish it for its transgressions against my goals, but also just to see if I could do it. I’m the boss, body! Not you!

And so began my epic adventure aboard the Great Space Elliptical…

00:15:00 Fifteen minutes in, I feel a cramp coming on. A “stitch”. I attribute this to drinking too much water and V8 before beginning my workout. I’ve read on the internet that the best way to get rid of this type of cramp is to stretch out and take slow, even breaths. I try that…

00:20:00 Twenty minutes in, and the stitch has not gone away. I feel like I’m moments away from giving up, especially when I think about being only 1/3 of the way through the hour. The pain has me hunched over the elliptical like Quasimodo. I can hear the Whirly Bird taunting me in my brain.

00:20:06 Milliseconds later, the fitness gods descend on my soul like gangbusters. The theme from Rocky has come on my earbuddies!!! I am so inspired that the pain disappears and I raise my hands in victory!!! Nevermind what the other JFZ patrons think! (though I am now convinced that I’m officially on their COC as “that guy who did a victory dance on the elliptical”)

00:20:08 I think I overpumped myself because I blacked out for a few seconds from sheer fitness exuberance. I’m not sure, but I may have been speaking in tongues.

00:27:00 “All I Do is Win” comes on the ipod. Leaving me in sheer fitness nirvana. I don’t listen to a lot of popular rap and/or hip hop, but this song was the theme song for the Auburn Tigers last year. It makes me want to buy the world a coke.

00:35:00 My usual stopping point. I’m soaking wet with sweat, but James Brown is assuring me that “I’ve Got the Feelin'”. Like I said, this is the point where I usually get off the Bird and go downstairs to meet the Trilogy. But I’m over halfway to today’s goal and still feel really good, so I have no doubt that I’ll make it…

00:40:00 The cramp is back, but at 40 minutes, with only 20 left to go, I refuse to give in to pain. What’s the worst that could happen??? If you would have asked me then, I would have said that it felt like my spleen might explode.

00:45:00 It’s been almost a month since I started going to the gym, and the 45 minute mark is as far as I’ve gone. From here on out, we’re off the map. Uncharted territory. I am soaking wet, sweating through my shirt (which was white. Check out these boobs, ladies!). The pain in my side has subsided a bit. I think it realized it couldn’t win so it gave up.

00:50:01 Queen Bitch comes on the ipod and I realize that there is no stopping me at this point. Less than 10 minutes to go, and only now do I realize that I will definitely finish. This gives me the energy to pedal faster…

00:58:00 2 minute warning. Finish strong. I cranked the difficulty up to 11 (I literally did this, and yes, it was a real-life Spinal Tap reference). If you’ve ever done 11 difficulty on the elliptical, you know it is hard. These last two minutes nearly did me in…

01:02:00 After a two minute cooldown period, I dismounted, wiped the manjuice off the Bird, and left.

I didn’t do any weight-lifting today. Tomorrow we’ll get back to routine, but today I really just wanted to see if I could do it, and I could, so I’m really satisfied with today’s workout. 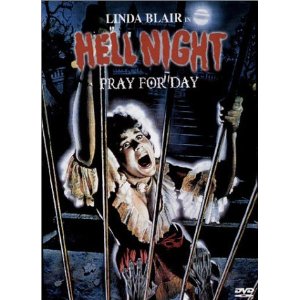 Another entry in the “teenagers partying in the wrong place” is “Hell Night”.

After the Exorcist (and the Exorcist 2, which isn’t really as bad as everyone says it is), Linda Blair was branded as a “scream queen”. She could only get work in horror movies.

In this one, she’s a few years older than she was in the Exorcist (that’s her on the cover with her bazonkers trying to unlock the fence). Old enough to convincingly play a college student.

It’s a plot taken straight from all the ghost stories you read as a kid: in order to get into a fraternity-type club, 4 college kids are locked into “Garth Manor”, the local haunted house, overnight. This is a bad idea because a bunch of people who survived a massacre there still live there, and they don’t like their land being trespassed on.

This is a pretty decent flick with some creative deaths. It makes for a good Halloween picture because any story about young adults having a party that doesn’t end well is great for Halloween parties.

It has a bit of a gothic flair to it, almost like an updated Hammer Horror movie. I mean, take a look at Linda Blair’s costume, or any of the costumes! They are all very Mary Shelley-ish. Ruffles and shit. Like the pirate shirt in that episode of Seinfeld.

The costumes, along with the classic haunted house atmosphere provided by candelabras, spider webs, creaky staircases, really amp up the gothic Halloween-ish-ness of the movie. If this didn’t have the graphic murder scenes, it could easily be watched by kids on Halloween. Or if your parents were like mine, you watched it anyway. Then dreamed about being locked in a house populated by murdering murderers.

But don’t take my word for it, imdb has been kind enough to allow us to watch the entire film on their website.

But if you don’t want to sign in to imdb, you can watch it via youtube here:

(((Well. Sonofabiscuit. Someone else doesn’t want to share with the world. Go watch it somewhere, anywhere…)))